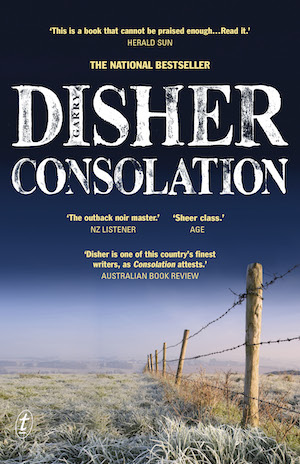 I have previously read and reviewed the two earlier novels in the series — Bitter Wash Road and Peace — and thought both immensely rewarding crime reads. Consolation is more of the same.

In this novel, which is set in the middle of winter (about six months on from the previous book in the series), things are relatively quiet for Constable Paul “Hirsch” Hirschhausen, who runs a one-man police station in Tiverton, a small town about three hours north of Adelaide. Much of his work is proactive and community-based. Twice a week he carries out long-range patrols, driving through cold and muddy conditions, to visit remote properties to check on residents.

The only thing that is causing concern is the presence of a “snowdropper” — Australian slang for someone who steals clothing from a clothesline — in town. He (or she) has a penchant for old ladies’ underwear and is causing a bit of a stir.

But that ongoing crime soon gets superseded by a string of other potentially more serious crimes, including a stock agent said to be ripping off local investors in a failed “get rich quick” property scam. The agent has pissed off two investors, a father and son team, who have decided to take the law into their own hands, with potentially devastating (and violent) consequences.

Meanwhile, a school teacher tells Hirsch that she is worried about one of her remote students whom she teaches via the internet. When Hirsch drives out to the property to carry out a welfare check, he finds the girl living in appalling conditions, tied up in a caravan, and has to take drastic action to save her.

And no sooner is Hirsch investigating that situation than he is alerted to another problem: an elderly lady in town has discovered that she’s been defrauded of thousands of dollars. But who is the culprit? Her hippy niece? Or the well-meaning neighbours who have eyes on her property?

All these myriad crimes, which have to be investigated concurrently, occur just as Hirsch’s boss, the sergeant based in the next biggest town, is forced to take sick leave. This means Hirsch is now acting sergeant, leading these investigations while looking after two younger officers only a year out of police school. Is he up to the job?

For those that have followed this series from the start, Consolation offers some rewarding character development.

Hirsch, a whistleblower banished to Tiverton from the city in the first novel, has finally found his feet after a rocky start. He is familiar with the area now, knows all the people who live in it, and even has a steady girlfriend: Wendy Street, whom he first met in Bitter Wash Road. (The charming relationship he has with his girlfriend’s daughter is particularly edifying and is one of the nicest things about this book.)

He’s more “rural wise”, too, and knows how to handle the roads, the conditions and the remoteness of the area, constantly looking for those “two bars” on his mobile phone whenever he thinks he might be entering dangerous territory and in need of quick communication.

I think what’s interesting about this series is that Disher isn’t solely focused on throwing in one big crime and having his protagonist solve it. In this novel, Hirsch is dealing with multiple crimes, from fraud to child neglect, and running the investigations on a shoestring, sometimes with the help of more senior police from the city, but always having to do it against the clock while managing local sensitivities.

Perhaps the only element of Consolation I wasn’t too sure about was a storyline involving Hirsch being stalked by a lonely woman who takes a shine to him, only because it didn’t always ring true.

That aside, this is another fine example of “rural noir” by Garry Disher and I hope he’s penning a new one in this series. If he is, I will be the first in the queue to buy it!

This is my 20th book for #20booksofsummer 2021 edition. I bought it in paperback from my local independent book store when it was published late last year.

7 thoughts on “‘Consolation’ by Garry Disher”