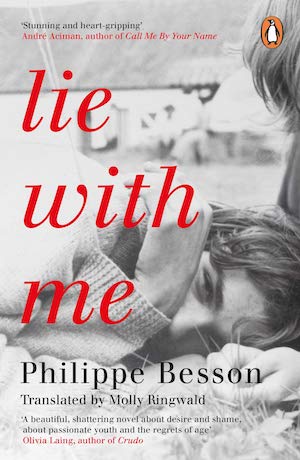 The passion that can’t be talked about, that has to be concealed, gives way to the terrible question: if it isn’t talked about, how can one know that it really exists?

Lie With Me by Philippe Besson is a bittersweet novella about first love between two teenage boys in rural France in the 1980s.

Their affair, kept hidden because of the shame surrounding homosexuality at the time, begins in winter but is over by the summer. During those few intense months, their love is passionate but furtive. For both boys, it is a sexual awakening that has long-lasting repercussions on how they live the rest of their lives.

A story in three parts

In the first section, he details the affair he had with Thomas Andrieu, whom he had admired from afar for quite some time before Thomas, who was a year older than him, issued a surprise invitation.

In the second, more than 20 years after their affair ends, Philippe runs into Thomas’s doppelganger — only to discover that the good looking young man is, in fact, Thomas’s son, Lucas.

In the third and desperately sad final part, Lucas gets in touch with Philippe to impart some news about his father.

An old story told in a new way

Of course, we have read this kind of story about forbidden love before. Perhaps what makes this novella different (aside from the fact it has been translated by Hollywood actress Molly Ringwald) is that it reveals what happens when people are not allowed to be their authentic selves.

In the aftermath of the affair between two teenagers on the cusp of adulthood, we come to understand how their sexual orientation shapes the rest of their lives: one man embraces his homosexuality and is comfortable in his own skin, while the other gets married and tries to be someone he is not — with tragic consequences.

The novella is written in a deeply melancholic style and is completely free of sentiment. The prose is sensual, tender and filled with longing.

This feeling of love, it transports me, it makes me happy. At the same time, it consumes me and makes me miserable, the way all impossible loves are miserable.

But as much as I admired the beautiful writing, I found it hard to connect with the protagonists, not because I didn’t understand nor empathise with their predicament, but because the narrator’s voice is so cool and aloof I felt one step removed from the story. And yet, this is a terribly sad tale about thwarted opportunity, lost love and the inability to live an authentic life. It should have wrecked me; instead I felt emotionally detached.

Several reviews I have read have drawn comparisons with André Aciman’s Call Me by Your Name. I have not read that book but I have seen the film adaptation, which is so beautiful and EMOTIONAL and absolutely DEVASTATING that I bawled like a baby at the end. It’s kind of how I thought this one would affect me, but it didn’t.

That said, Lie With Me has been adorned with praise (including from Aciman himself) and been a bestseller in France. It won the prestigious Maison de la Presse Prize in 2017 when it was first published.

‘Fairyland’ by Sumner Lock Elliott: Australian classic about a gay man hiding his real self from the world in the 1930s and 40s when homosexuality was illegal.

‘The Last Fine Summer’ by John MacKenna: A heart-rending Irish novel about a newly widowed school teacher recalling his love affair with a man 10 years earlier.

12 thoughts on “‘Lie With Me’ by Philippe Besson”