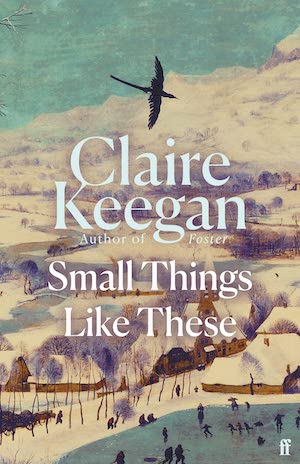 Claire Keegan is a well regarded Irish writer best known for her short stories, which include the collections Antarctica (1999) and Walk the Blue Fields (2007), and her novella Foster (2010), which you can read for free on the New Yorker website if you wish to get a feel for her writing.

Her latest book, Small Things Like These, is being marketed as a novel, but it’s only 73 pages in length and feels more like an extended short story. It’s written in Keegan’s typical economical prose, but addresses big themes and big emotions.

It’s a beautiful portrait of a man carrying out a small act of defiance against the Catholic Church at a time when it controlled almost every facet of Irish life.

The story is set in Ireland in 1985, a period of economic deprivation and political instability, when  “the young people were emigrating, leaving for London and Boston, New York”.

Bill Furlong is a hard-working coal merchant who is married with five young daughters. But he’s stuck in a rut and is beginning to wonder what his life is all about. Christmas is approaching and there’s a lot to do to get all his deliveries completed on time.

What was it all for? Furlong wondered. The work and the constant worry. Getting up in the dark and making the deliveries, one after another, the whole day long, then coming home in the dark and trying to wash the black off himself and sitting into a dinner at the table and falling asleep before waking in the dark to meet a version of the same thing, yet again. Might things never change or develop into something else, or new? Lately, he had begun to wonder what mattered, apart from Eileen and the girls. He was touching forty but didn’t feel himself to be getting anywhere or making any kind of progress and could not but sometimes wonder what the days were for.

His mind keeps returning to his upbringing by a single mother, who was a domestic servant in a Big House when she fell pregnant at 16. At this time, unwed mothers were condemned and their children stigmatised. Bill was fortunate that Mrs Wilson, the widow who owned the Big House, was kindly and maternal.

When his mother’s trouble became known, and her people made it clear that they’d have no more to do with her, Mrs Wilson, instead of giving his mother her walking papers, told her she should stay on, and keep her work. On the morning Furlong was born, it was Mrs Wilson who had his mother taken into hospital, and had them brought home. It was the first of April, 1946, and some said the boy would turn out to be a fool.

But even now, all these decades later, he still feels tarnished by the knowledge that he was born out of wedlock and that he has no idea who his father is. The only real male role model in his life has been Ned, the farmhand at the Big House, with whom he still keeps in touch.

Where was his father now? Sometimes, he caught himself looking at older men, trying to find a physical resemblance, or listening out for some clue in the things people said. Surely some local knew who his father was – everyone had a father – and it didn’t seem likely that someone hadn’t ever said a word about it in his company for people were bound, he knew, to reveal not only themselves but what they knew, in conversation.

A visit to the convent

The pivotal moment in the story happens when Bill makes a delivery to the local convent — “a powerful-looking place on the hill at the far side of the river” — run by the Good Shepherd nuns. The nuns run a training school for girls on-site, along with a successful laundry business. Bill is aware of local rumours that the girls are of “low character” and that they work demanding hours in the laundry as a form of penance, but he has no proof, and what would he do about it anyway?

But when he discovers a thin, dishevelled and clearly frightened teenage girl locked in the coal shed, he begins to join the dots. Aware of his own five daughters at home and the knowledge of his own mother’s fate, he decides it’s time to do something to help. He is, in effect, paying forward Mrs Wilson’s kindness.

Small Things Like These is a short, powerful read, one that will linger in the mind for a long time. The author has dedicated it to the “women and children who suffered time in Ireland’s Magdalen laundries” and her afterword provides a brief history for those who aren’t aware of these scandalous Catholic institutions that housed unwed mothers and abused them.

Small Things Like These will be published in the UK on 21 October 2021 and in the US and Canada on 30 November 2021. In Australia, the Kindle edition will be available on 19 October.

9 thoughts on “‘Small Things Like These’ by Claire Keegan”