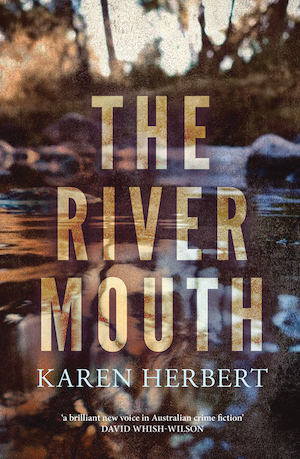 Karen Herbert’s The River Mouth is an impressive debut crime novel set in a small coastal town in Western Australia.

An old case is re-opened

It has been 10 years since local teenager Darren Davies was murdered. He was shot dead and found floating face down in the Weymouth River. No one has ever been convicted of the crime.

But now his mother, Sandra, receives some unexpected and disturbing news: her best friend, Barbara, has been found dead in the Pilbara, in the north of the state, and forensics have discovered a match — her DNA matches the DNA found under Darren’s fingernails all those years ago. Did Barbara kill her best friend’s son, and, if so, why did she do it?

The story alternates between the present day  — following Sandra as she tries to make sense of the situation and the newly reopened police investigation (she refuses to believe her friend had anything to do with the murder of her son) — and the past when Darren and his friends hung out together in the 25 days leading up to his death. The case is clouded by a series of rapes (or attempted rapes) of teenage girls around the time that Darren was killed.

As these twin narratives unfold, the author provides a steady drip-feed of new information and clues to help shape the reader’s perception of what might have happened and who might be involved. There’s a list of potential culprits, including Darren’s trio of teenage friends and his adopted father, which is only matched by a series of well-kept secrets involving everything from teenage romance to money made in illicit ways. The small-town intrigue resonates off the page.

The story is populated by a strong cast of characters — the teenage boys are particularly well-drawn and Sandra, who is a nurse at the local hospital, is a strong, resilient lead, the kind of woman who just gets on with things and sees the best in everyone.

The sense of time and place, swinging backwards and forwards by a decade, is expertly done. There’s plenty of cultural references — to movies, music and TV shows, and even the ubiquitous visit to a video store — to provide the right level of historical “flavour”.

The River Mouth also brilliantly captures the minutiae of small-town life, where everyone knows everyone else’s business (or thinks they do).

It’s incredibly well-plotted, so much so I failed to guess the culprit. But this is not a twist-driven novel (thankfully); its pacing is gentle as the twin storylines take their time to unfold. And the resolution, which caught me by surprise, feels believable, unlike so many other crime novels which tend to tie things up in preposterous ways.

I really look forward to seeing what Karen Herbert comes up with next!

This is my 23rd book for #AWW2021. I also read this book as part of my #FocusOnWesternAustralianWriters because the author grew up in Geraldton on the midwest coast of Western Australia and now lives in Perth. You can find out more about this ongoing reading project here and see what books I’ve reviewed from this part of the world on my Focus on Western Australian page.

8 thoughts on “‘The River Mouth’ by Karen Herbert”