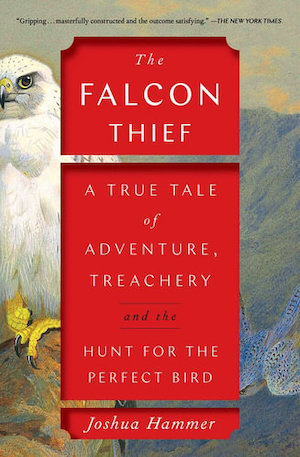 For around 18 years (1998-2016), I worked on specialist magazines in the UK covering all kinds of subject matter, from equestrian sport to gamekeeping, in which I had no specialist knowledge — just natural curiosity and a willingness to learn new things and ask a lot of questions.

During 2005-2010, I was deputy editor, later rising to the editor, on a weekly publication about birdkeeping (even though I knew little about birds). We used to run four pages of news every week, the great bulk of it about bird crime — specifically, the theft of birds and or their eggs from the wild — and conservation.

Later, I was freelance sub-editor and then permanent content editor on a weekly country sports magazine that ran a lot of stories about birds of prey being persecuted (allegedly by gamekeepers protecting their gamebirds) or “going missing” in the wild under unexplained circumstances. In fact, in 2015-16 we ran so many stories about hen harriers that I’m surprised we didn’t change our name to Hen Harrier Weekly.

This is a long-winded way of saying that I was immediately intrigued by Joshua Hammer’s non-fiction book, The Falcon Thief, when I saw it on the shelf because it covered a topic with which I was relatively familiar.

Subtitled A True Tale of Adventure, Treachery and the Hunt for the Perfect Bird, it charts the life, times and crimes of a convicted wildlife thief who worked across three continents as well as telling the story of the British policeman who was instrumental in securing a conviction. It’s part police procedural, natural history treatise and true crime tale, and it reads like a well-crafted, page-turning novel. It is narrative non-fiction at its very best.

The story begins with the apprehension of Irishman Jeffrey Lendrum at Birmingham International Airport, in the UK, on 3 May 2010. He was headed to Dubai but never got on the flight because a security guard noticed him behaving suspiciously. He was apprehended by officers from the Counter Terrorism Unit, but he didn’t have a bomb strapped to his body —  he had 14 fragile peregrine falcon eggs taped to his abdomen.

Lendrum claimed he was suffering from spinal trouble and that he was carrying eggs — which he claimed were from ducks — because they “force him to keep his stomach muscles taut […] and strengthen his lower back”.

(Isn’t that the most ludicrous thing you have ever heard? As the book reveals, Lendrum is notorious for making up ludicrous stories and this is not the worst of it.)

Investigations revealed the eggs had been stolen from a remote cliffside in Wales, most likely “on order” for wealthy clients in the Middle East, specifically Dubai, where rich sheiks pay huge money — up to $40,000 for a single bird — to secure the very best birds for falconry racing. This is an exclusive sport offering millions of dollars in prize money (the Abu Dhabi Falconers Club’s annual President Cup, for instance, offers a purse of $11 million) and prestige.

Lendrum’s arrest made headlines because nobody had been caught smuggling rare raptor eggs in the UK for decades. This is where Detective Andy McWilliam, of the UK’s National Wildlife Crime Unit, steps in. The unit struggles for money and credibility (few people see wildlife crime as “real” crime), so the case is a chance to prove its worth.

A headline-making conviction of a notorious wildlife criminal could protect the unit from closure — or even, if McWilliam, was very, very lucky, get his budget significantly raised for the next year.

The book weaves together these dual narratives — of the crime and the investigation — and highlights how both men develop an almost symbiotic relationship that spans years and continents because Lendrum didn’t just do this once, he did it multiple times.

It shows how Dubai, in particular, has fuelled the black market for endangered birds of prey because of the belief that  “falcons stolen from nests are innately superior to those bred in captivity”.

The author describes this as a “shadowy world”, one that draws in Lendrum, who, it turns out is a well-travelled, fearless character almost too fantastical to be true. He’s an intelligent ornithologist, an obsessive egg collector, a skilled climber, a brave adventurer, a clever businessman, an imaginative liar and a master manipulator. His crimes stretch back decades, from his early life in South Africa, where he made a name for himself as a well-respected wildlife enthusiast volunteering on research projects, to a businessman in the UK using his shopfront as a cover for illicit activities.

His foe — McWilliam — is equally intriguing. A policeman with decades of experience, who shunned promotion because he liked walking the beat, and then used his skills in a newly emerging field of investigation, he’s the resilient, hard-working, never-give-up type of bloke you want on your side.

This is a hugely enjoyable book, well-paced and filled with enough natural drama and tension to make it a page-turner. Will he or won’t he get convicted? What daredevil feats will Lendrum commit to feed his obsession? Will McWilliam’s unit get closed down and will he have to give up the chase? You will have to read it to find out…

I read this for Non-Fiction November (#NonFicNov) hosted by various bloggers of which you can find out more here. (Note, there’s a whole bunch of prompts for the month, but reading by schedule doesn’t really work for me, so I hope the hosts don’t mind me reading and reviewing non-fiction on a whim. )

10 thoughts on “‘The Falcon Thief: A True Tale of Adventure, Treachery and the Hunt for the Perfect Bird’ by Joshua Hammer”