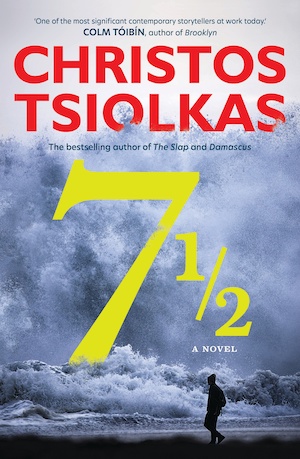 In 1963, the Italian film director Federico Fellini directed a film called 8½ in which a troubled filmmaker struggles to get a new movie off the ground. Weighed down by the project, he retreats into the inner world of his thoughts, recalling past and present romantic entanglements, which, in turn, begin to affect his film work so that it becomes increasingly more autobiographical.

Christos Tisolkas’ new novel, 7½, transposes that idea into the world of literature, placing himself as the central character who is working on a new novel, all the while getting lost in his own thoughts, remembering his childhood and writing a memoir of sorts.

I have three stories I wish to tell. The simple nature of our craft is to vomit these stories out on a page. It is an ugly analogy but I think it is apt.

The book is comprised of three main threads, which evolve over time, and criss-cross over each other like an intricately woven tapestry. It’s a book that merges meta-fiction with auto-fiction, throws in some nature writing, offers lots of musings and thoughts about art and beauty, love and eroticism, and attempts to explain the meaning of literature and why novelists do what they do. But despite these many disparate threads, it feels like a seamless, effortless whole.

In the first thread, we meet a writer called Christos Tsiolkas who has headed to the southern NSW coast for a couple of weeks solitude to focus on his writing. Here, in a beach-side cottage, he goes for daily swims, breathes in the beauty of the world around him and shuts out all distractions, including his mobile phone which he locks away in a room, only using it to call his partner who remains behind in Melbourne.

The second thread is about writing and why Christos has decided to shun the usual topics — “Morality or Politics or Race or Class or Gender or Sexuality” — he covers in his work. We find out about the genesis of his new novel, which may or may not become a screenplay for a film.  He tells us how he came up with the idea, why it’s important to him and how he is struggling to write it — and then we get to read it in what feels like real-time as the story develops. This novel is about an American porn star, Paul Carrigan, who lives in Australia and is married to an Australian woman with whom he has a teenage son. Carrigan is offered $180,000 to sleep with an ageing fan in California, and the novel follows what happens when he makes the trip.

The third and final thread is the story of Christos’ own life, beginning with memories of his childhood in working-class Melbourne where he was raised by his Greek immigrant parents. Much of what he writes tries to explain how his personal beliefs, his homosexuality and his appreciation of art and beauty have all been shaped by his experiences.

A book about beauty

I especially enjoyed his musings on literature — he doesn’t claim the novel is dead, but he does say it has become  “timid” and “cowardly”, with writers looking over their shoulders seeking approval from peers, colleagues, friends and social media, instead of being true to their selves. Later he accuses novelists of becoming homogenised:

Every bloody novelist sounds the same now, whether they are American or Austrian or Angolan or Andalusian or Australian. All the same cant, all the same desire to shape the world to their academic whims and aspirations. All this compassion and all this outrage and all this empathy and all this sorrow and all this fear and all this moralising and not one sentence of surprise in it.

Perhaps one of the most telling scenes in the book is when Christos has a frank conversation with his friend Andrea about his work. He confesses that he is writing a novel about beauty because it’s a challenge to capture beauty on the page.

“I want it to be simple, almost straightforward in its intent. If I were a poet, it would be easier. Or if I were a musician. It is harder to distil beauty into prose. The novel is treacherous.”

But she accuses him of taking the easy option, of no longer wanting to change the world with his writing.

“You can’t write about beauty,” she says calmly. “You  don’t have the talent.”

Despite what the author might say, 7½ doesn’t shun the usual, sometimes controversial or confronting, topics that are present in his earlier work (see all my reviews here), because you can’t write about beauty without discussing morality and politics and gender and class and so on. The topics might not be capitalised but they are still there.

But where this novel works best is in that grey space between memory and imagination, where creativity collides with memoir, and how noticing a particular fragrance or hearing a familiar song can transport us back to another time and place, and how that is deeply connected to our emotions and, in turn, our sense of self.

7½ might not be your usual Tsiolkas novel, but it’s just as powerful and thought-provoking, if not more so, than anything he’s written before.

I read this book as part of #AusReadingMonth, hosted by Brona’s Books