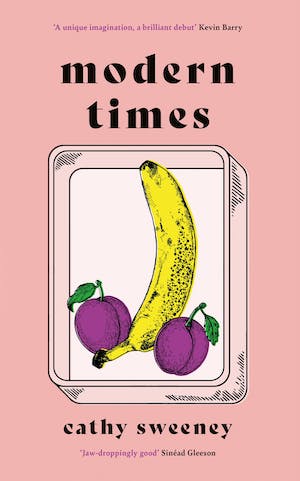 This is why I love browsing in the library so much; I would not have discovered Cathy Sweeney’s Modern Times otherwise.

First published in the Republic of Ireland by Stinging Fly Press and now reissued by W&N, it is a collection of short stories with an absurdist and often risqué slant.

The suggestive cover art — designed by Steve Marking / Orion — is perfectly appropriate, for the very first story, “Love Story”, opens like this:

There was once a woman who loved her husband’s cøck^ so much that she began taking it to work in her lunchbox.

How’s that for an opening line?

There are other stories that revolve around sex and love affairs and lust. Most are only a few pages long, but they are shocking, confronting and wickedly funny by turn.

In “The Birthday Present”, for instance, a woman buys her husband a sex doll called Tina for his 57th birthday and keeps it locked in the guest room for his personal entertainment. But when he dies unexpectedly, she has to keep “Tina” hidden from her adult children.

In “The Handyman” a divorcee wonders what it would be like to have sex with the handyman she invites into her semi-detached house to fix up a few things before putting it on the market, while in “A Theory of Forms” a teacher reminisces about the illicit sex she used to have with a teenage boy who had learning difficulties.

In “The Woman with too Many Mouths”, a man plans to end his affair with a woman who has two mouths — “She was, as I said, not my type” — while in “The Chair”, a married couple take it in turns to administer electric shocks as a substitute for sex:

When it is my turn to sit in the chair, I am almost relieved. In the days leading up to it I become irritable, angry, even on occasion experiencing violent ideations. Often, during this period, I think of leaving my husband, of breaking everything. But when the time comes to sit in the chair I do so without protestation. A sensation of release and expanse overtakes me, as though I am swimming effortlessly in a vast blue ocean, obeying laws of nature that are larger than me, larger than the universe.

Not all the stories are framed around these taboo subjects. Some are truly bizarre and best described as OFF THE WALL, bonkers or just plain WIERD.

There’s a story about a palace that becomes sick evident by a “dark discolouration” spreading through the bricks at the top of its tower. Another story revolves around a manuscript that is found wrapped in newspaper and hidden behind a boiler in a house recently “vacated” by an old man. In another, a son returns from boarding school and is instructed to supervise his mother at a family celebration for fear she will get up to “her old antics, letting the whole family down”.

Out of the 21 stories in the collection, my favourite is “The Woman Whose Child Was A Very Old Man” in which an unmarried mother escaping a “dull provincial backwater” moves to a city bedsit and takes a job at a local shop. She can’t afford childcare, so while she is at work she puts her baby in the freezer and as soon as she gets home she thaws him out.

Well, human nature is human nature, and anything can become normal. Soon putting the baby in the freezer was part of the rhythm of life. There were no various side effects. The baby went into arrested development while frozen, but then caught up easily when thawed out. When the woman had a day off the baby sometimes outgrew a romper suit in an afternoon or learned to crawl in an hour.

Eventually, this pattern of freezing and growing gets out of whack, and the child grows — and ages — too quickly. And then the woman gets distracted by her new career as a writer and forgets her child in the freezer, only to return years later to find he’s become a very old man. Yes, I told you the stories were bonkers.

The blurb on my edition suggests that Sweeney’s stories are reminiscent of Lydia Davis, Daisy Johnson and Angela Carter, but having only read Carter’s The Fairy Tales of Charles Perrault I don’t know how accurate that comparison is. They do bring to mind the genius that is Magnus Mills, perhaps because of the simple, fable-like prose in which they are written. Regardless, they are wholly original — and totally memorable.

Modern Times is a refreshing palate cleanser offering a quirky, inventive take on the short story. It is great fun to read! I hope Sweeney writes a novel next so she can give extended reign to that vivid imagination!

I read this book as part of Cathy’s #ReadingIrelandMonth2022. You can find out more about this annual blog event at Cathy’s blog 746 Books.