Charmian Clift (1923-1969) was a legendary Australian writer and essayist. She was married to Australian war correspondent and author George Johnston (1912-1970) with whom she had three children. The couple moved to London in the early 1950s, where they resided for several years, before moving to the Greek island of Kalymnos in the south-eastern Aegean Sea. They later moved to the island of Hydra, where they became part of a Bohemian group of foreign artists and writers, which included young Canadian poet/songwriter Leonard Cohen.

Mermaid Singing (1956) and Peel Me a Lotus (1959) are two memoirs that Clift wrote about her family’s time in Greece. They were brought together in one volume and reissued by Harper Collins Australia earlier this year. In the UK, they have been published as single volumes, with gorgeous covers, by Muswell Press. 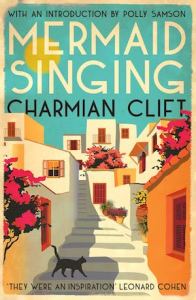 This memoir charts Clift and Johnston’s move to Kalymnos where they planned to live as cheaply as they could while they worked on their books. (The pair collaborated on The Sponge Divers, a novel set on the island, during their stay.)

“We came to the island of Kalymnos in the small grey caique Angellico, belting in around Point Cali with a sirocco screaming in from the south-west, a black patched triangle of sail thrumming over our heads, and a cargo of turkeys, tangerines, earthenware water jugs, market baskets, and the inevitable old black-shawled women who form part of the furnishings of all Agean caiques.”

In beautifully evocative prose, Clift outlines a year living on the island. The entire experience is a culture shock — there is no running water nor electricity; even furniture is hard to come by with nary a wardrobe or chest of drawers to be found. Privacy is non-existent, with local villagers treating everyone’s houses as common property, and the Johnston’s attracting a lot of attention because they are foreign.

There is deprivation everywhere — food is scarce, children run around in rags, buildings are decrepit. Most families survive by sending their men off to sea for months at a time where they risk their lives to deep-sea dive for sponges, sometimes returning home with twisted legs caused by the bends.

Yet for all the poverty and harshness of life, there is a real sense of community, one that embraces the Johnstons, including their two young children Martin and Shane, with open arms. In this strange new world, Clift turns a forensic eye on cultures and customs to report on a way of life that was poor and primitive (even by mid-century London standards). Some of her chapters read like expertly crafted magazine features that would not be out of place in a glossy newspaper supplement today. She really gets under the skin of what makes the people and the place tick, writing about the sights,  smells and textures in filmic detail.

Mermaid Singing is as much an anthropological study (in the same vein as J.M. Synge’s The Aran Islands) as it is a story of two writers escaping the rat race to focus on their creative output. It is a lush and gorgeously vivid read. 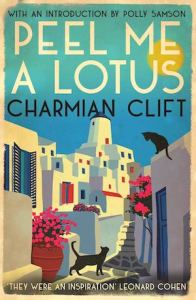 Peel Me a Lotus

The second volume of Clift’s memoirs, Peel Me a Lotus follows nine months in the lives of the family, who have now decamped to Hydra, an island closer to the Greek mainland, and with a growing reputation as a Bohemian hangout.

When the book opens, Clift is pregnant with her third child and the couple are racing to fix up a house they have purchased before the baby arrives.

This memoir is less about traditional island life than her previous volume and more about the life of the family, how they go about setting up their home, the tensions Clift experiences between living a life of domesticity and one of creativity, and the role the couple play in the foreign community of artists and poets and writers who have made Hydra their hang out.

If the island is no longer ‘our’ island, it is very lovely nonetheless. A summer island, a painter’s paradise, just enough off the beaten track to be an authentic ‘discovery’, simple still, and strong with its own personality. ‘Quite unspoilt,’ people are heard to say. ‘The essence of Greekness. An absolute gem.’

Again, this book is full of bold and colourful descriptions of people, locals and foreigners alike, and places, including the dramatic landscape, the port and the sea, enough to make you feel as if you are there soaking up the sunshine, the plentiful wine and the good vibes.

Given our current travel restrictions (because of the Covid-19 global pandemic), reading this book is the next best thing to visiting the Greek islands yourself. I loved it. Cathy at 746 Books recently reviewed this one too.

This volume represents my 16th & 17th books for #AWW2021 and my 14th & 15th books for #20booksofsummer 2021 edition. I bought it in January this year, delighted to see these memoirs back in print at last! I’ve long been a George Johnston fan (his novel ‘My Brother Jack’ is my favourite book of all time, but read pre-blog and not reviewed here), but I had never read anything by Clift and had been wanting to do so for a very long time.