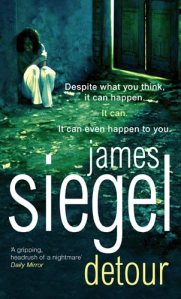 First things first. If you read this book you need to check your brain at the door. Detour is not highbrow literature. Instead it’s a fast-paced plot-driven romp that reads like a movie screenplay. It’s well written in the sense that it’s effortless to read. But if you’re expecting something that will rock your world or make you see things in a different light or have you reassessing your life, then give this one a wide berth. It’s enjoyable and entertaining. No more, no less.

Like Siegel’s previous effort, Derailed (which was turned into a movie starring Jennifer Aniston), Detour is about ordinary people caught up in extraordinary circumstances. In this case, a young New York couple, Joanna and Paul, travel to Colombia to adopt a baby as part of a fast-track scheme set up by their lawyer. Of course Colombia is a dangerous country — a point which Siegel labours again and again throughout this long novel — and there’s a menace around every corner. Not surprisingly, the couple and their new adorable baby girl, Joelle, are kidnapped by left-wing militia — and then things really heat up.

Paul enters into a deal to secure their release: he must travel to New York as a drug mule with 30 condoms of cocaine inside him. He has 18 hours to deliver them to an address in Queens and once the drugs are safely handed over, Joanna and Joelle will be free to return to the USA. If he doesn’t hand them over, he will never see his wife and daughter again…

Of course — you guessed it — things don’t go according to plan, but to say any more would spoil the plot…

Detour is certainly an adrenalin-fuelled read. Siegel is shameless in wringing every last drop of fear out of the reader, manipulating events so that you’re never quite sure what is going to happen next. He’s very good at pulling at the heartstrings too — a pet hate of mine, I must add — and of building up the tension only to offer up an over-the-top-almost-ridiculous succession of climaxes that don’t really ring true.

However, if you can tolerate the narrative “tricks” and don’t mind loopholes in the story (for instance, when was the last time you read a book in which a character couldn’t ring the police because his landline had been disconnected even though he’d been using a mobile phone regularly up until that point?), then you’ll enjoy this thriller. I found it slightly annoying and about 100 pages too long, but other than that it was a cracking story that didn’t tax the grey matter too much, perfect for when you want a lazy I-don’t-need-to-use-my-brain read. 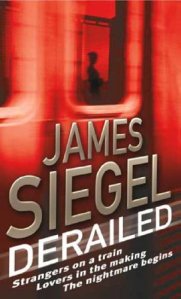 James Siegel’s Derailed takes the best bits of The Firm and throws in a smattering of Fatal Attraction to deliver a lightning-paced read with enough twists, turns and downright unexpected seismic shifts to keep you turning the pages late into the night (or, in my case, morning).

Charles is a well-paid advertising executive who’s living a treadmill-like existence until he meets a beautiful stranger on a train. Besotted by the green-eyed Lucinda, he embarks on an illicit affair, momentarily forgetting his wife of 18 years and their sick teenage daughter. But his moment of pleasure turns quite unexpectedly into a violent nightmare in which rape, blackmail and murder all play a part.

I believe Derailed has recently been turned into a film, but this book does not read like a padded-out screenplay, Siegel is an accomplished story-teller. His writing is taut and he knows how to deliver enough cliff hangers and shocks to keep even the most jaded reader turning the pages. The dialogue is believable and his characterisation is spot on too.

Despite the unlikely situation that the narrator finds himself caught up in, not once did I find myself suspending belief, not once did I think how ludicrous. And perhaps that’s what makes this thriller such a rollicking good one: you know it could happen to you because it’s a classic case of being in the wrong place at the wrong time. Or is it?

My only quibble with this book is its slide into almost-farce in the latter third and its too-neat ending. Still, it’s an entertaining read and you’d be hard pressed to find a better thriller that pushes all the right buttons in all the right places. If you like that kind of thing.