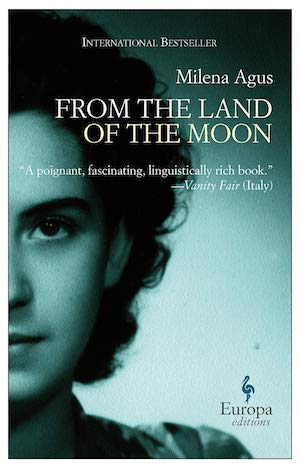 From the Land of the Moon earned debut author Milena Agus the prestigious Zerilli-Marimò Prize for Fiction in 2008.

It’s a simple tale but it packs an emotional punch — and it’s the kind of book you want to reread as soon as you reach the final page. That’s because there’s a little unexpected twist right at the end that turns everything on its head and makes you reassess all your assumptions about the characters and the way they chose to live their lives.

Set in Sardinia, it’s narrated by an unnamed woman who tells us the story of her grandmother, who, in 1943, was forced to marry a man she did not love. She was 30 and considered an old maid; he was more than 40 and a widower.

There was a “veil of mystery” over her and a troubled history that few knew about, much less discussed. Just days before meeting her husband, for instance, she had thrown herself down the well but had been miraculously rescued by her neighbours. She had a penchant for blades, secretly cutting the veins in her arms and hacking off her hair so that she “looked like a mangy dog”.

After their wedding, her new husband continues to frequent brothels. She doesn’t mind because it relieves her of her conjugal duties, but when she discovers the cost she makes an offer: “Explain to me what you do to these women, and I’ll do the same.”

In 1950, after several miscarriages, thought to be due to kidney stones, she is prescribed thermal treatments and sent to a spa on the mainland. Here she meets a handsome well-dressed man, an army veteran, who has a crutch and a wooden leg. The pair fall in love and she shows him the self-inflicted cuts on her arms (which she claims are from working in the fields), as well as the passionate love poems she has been secretly writing all her life.

He shares with her his love of music and reveals how he would play the piano at home for hours and hours.

Here at the baths he missed the piano, but that was before he began talking to grandmother, because talking to grandmother and watching her laugh or even feel sad, and seeing how her hair came loose when she gestured, or admiring the skin of her slender wrists and the contrast with her chapped hands — that was like playing the piano.

When she returns to her husband in Sardinia, she bears him a son — coincidentally, exactly nine months after her spa trip — but can’t stop thinking about her lover.

With him, she felt no embarrassment […] and since her whole life she had been told that she was like someone from the land of the moon, it seemed to her that she had finally met someone from her own land, and that was the principal thing in life, which she had never had.

When her son (the narrator’s father) is seven she takes two jobs as a maid to fund the piano lessons she organises for him. As an adult, he becomes a world-famous concert pianist, but she never goes to listen to him; it is too upsetting for her.

Many years later, in 1963, on a family trip to Milan to visit her sister and brother-in-law who had moved there, she wanders the streets alone in search of the Veteran’s house. Her plan is to run away with him, even if that means abandoning her husband and son, because she has such “heart-stopping longing” for him…

From the Land of the Moon is a quick, devastating read. It’s bittersweet, romantic, and tinged with melancholia but also punctuated by small moments of joy. And it asks important questions about love and marriage, commitment and desire, and the role of women in 20th-century Italian society.

The prose is charming, understated and rich with historical detail (particularly in relation to the Second World War and the devastation it wreaked on cities, people and the economy). And while the pacing is slow and steady, it builds to a surprising climax, one that had me turning back to the first page to begin the story all over again.

Any wonder this is an international bestseller. 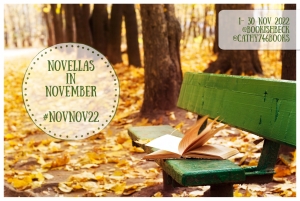 I read this book for Novellas in November (#NovNov22) hosted by Cathy at 746 Books and Rebecca of Bookish Beck.