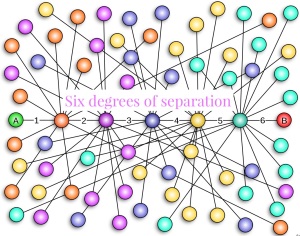 The first Saturday of the month means it is time to take part in Six Degrees of Separation, a meme hosted by Kate at booksaremyfavouriteandbest. In this meme, Kate suggests a starter book and the idea is to then create a chain of six more books, linking each one as you see fit.

I didn’t take part last month because August crept up on me unawares, but here is my effort for September. See if you can spot a theme!

This month the starting book is the last one read in August…I’m kind of cheating here because I’m starting with the last one I reviewed in August as I’m about 6 books behind. As ever, click the title to read my full review of each book…

In this intriguing novel, a young Chinese woman living in Beijing is widowed suddenly and begins a journey of self-discovery, which includes a trip to Tibet, a romance with a local bar owner and a rediscovery of her artistic side. The prose style is simple and hypnotic and the story blends folklore and mythic elements to create a rather enigmatic, sometimes perplexing, tale.

Another novel set in Beijing, this 600-plus extravaganza is a powerful story that bears witness to the Tiananmen Square massacre of 1989. t is a deeply moving account of the student pro-democracy movement, culminating in the massacre in which thousands of Chinese citizens were killed. Unusually, it is told from the point of view of one of the students, Dai Wei, who is in a coma. As a concept, this shouldn’t work, but in Ma Jian’s hands, this wholly original approach is devastatingly effective. (The book is banned in China and the writer is living in exile in the UK.)

The obvious link here is in the title, but I’m also linking to it because it is about a massacre. It’s a stand-alone crime novel (ie. not part of Mankell’s famous Wallender detective series) that follows an investigation into Sweden’s biggest (fictional) mass murder in which 19 people are slaughtered overnight in a sleepy village in the middle of winter. It’s not a police procedural as such because the crime is investigated by a middle-aged judge who has been signed off from work and needs something to occupy her time. Structurally, the book has some issues — the story, for instance, jumps back to the mid-19th century just as the investigation is hotting up, which interrupts the page-turning quality of the tale — but it’s an intriguing look at modern-day China’s hidden influence on the world and Mankell is not shy about wearing his politics on his sleeve, so to speak.

Sorry about the dark turn, but here’s another novel that features a mass murder as its starting point. In this unconventional crime novel from Japan, the focal point is the death of 17 people who are deliberately poisoned at a family celebration. The prime suspect is the family’s blind daughter, the only family member spared death, but why would she want to kill her loved ones? The novel is not really a whodunnit or a whydunnit. Instead, it looks at the far-reaching impact of the crime on the lives of so many people, including the police investigators, and it’s written retrospectively using multiple voices and multiple time-frames with no neat solution or ending.

Conventional structure is thrown out the window in this Japanese crime novel, too. Higashino is my favourite Japanese crime writer but this one was a little disappointing. it is set in Tokyo and follows the police investigation into the death of a 40-year-old woman. Each phase of the investigation is told as if it’s a standalone short story. With each new story, or chapter, we learn something new about the case as the list of suspects grows longer and longer. Eventually, Detective Kyochiro Kaga, a sharp-minded, highly experienced policeman, reveals the identity of the culprit, but it takes a long time to get there!

Staying in Tokyo, but leaving the crime behind, this is a bittersweet tale about a 30-something woman who embarks on a relationship with an older man who was once her teacher at school. It’s an unconventional love story because the pair never make dates; they simply go to the same bar at around the same time, sit next to each other and spend the evening drinking and talking. Their relationship, which grows from friendship into love, unfolds as gently as the narrative, which is written in stripped-back, often elegiac, prose.

Another story about a relationship between a younger woman and an older man, this novel takes a horrifying subject — a sexual deviant praying on an innocent girl — but writes about it beautifully. The prose is lush and hypnotic and the narrative is perfectly restrained, and yet it brims with tension. Will 17-year-old Mari be okay or will her boyfriend, who is 50 years her senior, turn out to be the next Ted Bundy?

So that’s this month’s #6Degrees: from a tale about a young Chinese widower on the brink of a new life to the tale of a Japanese teenager playing with fire, via stories set in Beijing and Tokyo, most of them using unconventional structures to keep things interesting.

An Yu’s novel Braised Pork is a little bit of an enigma.

I came to it with a couple of preconceptions — both of which proved to be wrong:

But it is neither of these things.

Instead, this is a novel about a widowed woman coming to terms with a new future that has opened out in front of her.

Its careful blending of mythic elements — I hesitate to describe it as magic realism, but it’s certainly got some of those qualities — with real-life trauma, gives it an unusual, almost esoteric, edge.

Dead in the bath

The story is set in modern-day Beijing and is told from the point of view of Jia Jia, a young woman married to a wealthy older man.

One morning in November she finds her husband, Chen Hang, crouching facedown in the bath, his “rump sticking out of the water”, his body stiff from rigor mortis. Next to him is a piece of folded paper bearing a crudely drawn figure — a fish’s body with a man’s head — something Chen Hang had recently dreamt about while on a solo trip to Tibet.

This sets Jia Jia on a quest to discover the meaning behind the “fish man”, a quest that becomes a journey of self-discovery, one that traverses grief, loneliness, family and freedom.

The “fish man”, which is a recurring motif throughout the novel, lends a perplexing element to the story. This puzzlement is further increased by a scene in which Jia Jia’s bedroom floor transforms into a watery abyss.

Looking down at the floor, she discovered that it did not exist any more, and what replaced it was the surface of a deep sea, as if she was sitting on the edge of a ship watching the reflection of the starless sky in the water. The darkness rippled like silk.

In another scene, a painting becomes a portal into a parallel world. It’s all very strange. Later, on a quick trip to Tibet, Jia Jia meets others searching for the same mythical “fish man” figure and is astounded to find a sculpture carved into a tree trunk that resembles what her husband had drawn.

Meanwhile, as Jia Jia readjusts to life without the man who provided her with everything, including a luxurious Beijing apartment, she comes to understand her marriage was loveless, and that she had been prevented from pursuing her career as an artist.

Her loneliness and cool detachment — which is mirrored only by the dispassionate prose style — is soothed by Leo, a local bar owner with whom she begins a fairly relaxed romance, and family members who encourage her to sell up and move in with them.

Portrait of a city

For all its strangeness and aching melancholia and inability to pigeonhole as a particular type of literary novel, Braised Pork is a wonderful portrait of metropolitan Beijing, with its pollution, expensive property and rampant consumerism.

The emergence of new social classes and the conflict between generations as a result of changes to long-held Chinese traditions gives the story added depth.

In one scene, for instance, a character bemoans the need to buy his children things — a soft mattress, shoe cabinets for trainers bought in New York, a tennis racket, ballet shoes  — that were unimaginable when he was young. In another, Leo is frustrated by his parents’ refusal to link their bank accounts to their phone apps “for fear of their money being stolen” and their inability to understand that opening their windows to let in what they believed to be “fresh air” was detrimental to their health — he had brought them an air purifier for this reason.

On the whole, I enjoyed Braised Pork even though I didn’t quite understand what it was all about. I loved the cool, hypnotic prose style, the main character’s journey of self-discovery and the portrait of modern-day China.

I’ve not read any Haruki Murakami (apart from his non-fiction book about running, reviewed here), but many of the reviews I have seen online draw comparisons to his work. If you are a fan, then An Yu’s novel might be worth hunting out.

This is my 9th book for #20booksofsummer 2022 edition. I bought it from my local secondhand book warehouse in April for $15.