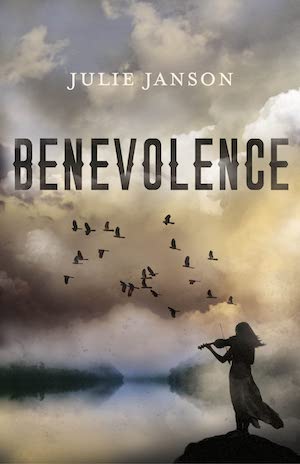 Julie Janson’s Benevolence tells the story of the early days of European settlement in Australia but with one important twist: it’s told through the eyes of a young Aboriginal girl.

Written as a rebuttal to Kate Grenville’s The Secret River*, a novel that dared to talk about frontier violence from a white perspective, Janson uses a First Nations lens to tell the other side of the story.

The author, who is a Burruberongal woman of the Darug Nation, says it is a work of fiction but is based on historical events in and around the Hawkesbury River in Western Sydney.

In her afterword, she says:

The characters are derived from Darug, Gundungurra and Wonnaruah Aboriginal people who defended their lands, culture and society. Muraging is based on my great-great-grandmother, Mary Ann Thomas, who was a servant on colonial estates in the Hawkesbury area. The other characters in the novel are inspired by historical figures and my imagination, except the governors who are based on historical documents.

Benevolence spans 26 years (1816 to 1846) in the life of Muraging (later renamed Mary), who finds herself caught between two cultures.

Raised and educated by white settlers at a boarding school set up for Aboriginal children, she desperately misses her family and for most of this novel, she swings between the two: working as a servant when she needs food and shelter, heading on country to be with her people when she needs to get back in touch with her culture and traditions.

But even when she is with her own kind she stands out, for she wears European, albeit servant, clothes, can play the violin (she totes one around with her) and speaks English. In white society, the colour of her skin marks her out as different and her pretty looks attract the unwanted attention of often violent men. No matter where she is, she is “othered” and her desire to fit in is only made harder by the children she bears (with white men) and must raise on her own.

But this is not just a tale about one indigenous woman’s experience, it’s a larger tale about the frontier wars, which rage on in the background, and of the violence committed on First Nations people by white settlers determined to keep the land for themselves, declaring Australia terra nullius and treating the original inhabitants as nothing more than vermin to be shot and exterminated.

From the start, Mary is aware of the danger that white men pose to her race because she has heard the rumours circulate at  school:

Days go by and Mary hears other children’s stories whispered in the night. Many have seen, and still see, the bodies of their parents shot and hung on trees with corn cobs in their mouths. They still watch in horror as crows peck out living eyes and black beaks pick brains.

Later, as an adult, she knows about the Bells Falls Gorge massacre, north of Bathurst, in which women and children jumped to their deaths after white settlers opened fire on them — and she is terrified she could be caught up in something similar.

She’s also increasingly aware of the destruction white people are causing and the implications this poses for local tribes. When she’s on country, for instance, the women in her tribe struggle to gather enough food to eat because “the white hunters have massacred all the local kangaroos” and there is little game nearby. The new settlers are also wreaking havoc in other ways:

The men discuss the thousands of newcomers arriving in ships in Sydney Town and how they crash through the bush smashing the fragile undergrowth, cutting down the oldest, tallest and most sacred trees – even carved burial trees. Log-splitting men follow the axe men and the sound is deafening, night and day. Fiery pits burn all night with wasted bark. Her peoples’ footpaths have become bullock tracks with deep greasy mud churned by huge wagons full of logs. The tiny fruits and flowers are being crushed. Nothing is left of the forest’s ceremonial sites. Their stories cannot be told if the places and sites of the ancestors are gone. The waterholes are ruined by cattle and the goona-filled water cannot be drunk.

Throughout the story, we see how Mary’s Christian upbringing — supposedly designed to deliver her from sin — simply entraps her. It’s a feeling that never quite goes away, messes with her sense of identity and makes her reliant on white settlers who don’t always have her best interests at heart.

Benevolence is an important book because it puts a human face to an Aboriginal perspective, a perspective that has previously been ignored or written out of history.

At times, I felt it lost momentum, perhaps because it is just so detailed, covering every aspect of Mary’s life, which includes time on the run in the bush, various jobs as a servant, a lusty romance with a white reverend and a short stint in jail. But on the whole, it’s a comprehensive account of all the many challenges and tragedies to which Mary must bear witness.

For another take on this novel, please see Lisa’s review at ANZLitLovers and Sue’s at Whispering Gums.

* The Secret River is based on Grenville’s ancestor Soloman Wiseman, a Thames waterman who was transported to Australia for theft, and who later settled on the Hawkesbury River at the area now known as Wisemans Ferry. He is mentioned in Benevolence as follows:

Wiseman’s Ferry is a large raft where loads of flour are winched across the river by a metal wheel driven by a horse. The old ferryman and innkeeper is Solomon Wiseman. His inn is called The Sign of the Packet; he is an ex-convict and lighterman from the Thames in London. Along the riverbank, the convict road workers are dressed in torn, dirty shirts, their skins tanned from the sun and hunger etched on their faces.

This is my 7th book for #20booksofsummer 2022 edition. I bought it in July 2020, began reading it and then got distracted by covid lockdown shenanigans and never returned to it. I also read it this year as part of my project to read more books by First Nations writers. You can see all the books reviewed as part of this project on my dedicated First Nations Writers page.

The second episode in the three-part TV series ‘Books that Made Us’ was screened on ABC TV tonight. (If you live in Australia and missed it, you can catch up on iView. You can also read my thoughts on Episode One here.)

This episode, called ‘Place’, was themed around cities and landscapes that have featured so strongly in Australian fiction, but it could easily have been called ‘History’ because it covered Aboriginal dispossession and our convict past, among other changes in Australian society over the years.

There were lots of wonderful interviews with most of the authors name-checked below, including footage of the late Patrick White, after he won the Nobel Prize for Literature (the first and only Australian to achieve that honour).

The books covered in episode two

Here is a list of the books mentioned in this episode. They have been arranged in alphabetical order by author’s surname. As ever, hyperlinks take you to my reviews.

The next episode, entitled ‘Power’, will be screened next Tuesday at 8.30pm.