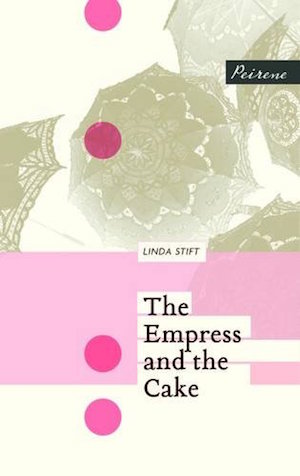 Linda Stift’s The Empress and the Cake is part of Peirene Press’ Fairy Tale Series. It’s an eccentric and twisted tale, first published under the German-language title Stierhunger in 2007, that retells the story of Empress Elisabeth of Austria’s obsession with keeping slim. Or at least I think that’s what it’s doing.

This is an odd story, a multi-layered story, a story that isn’t all that it seems. But the one abiding theme is appetite. How do we feed it, how do we control it, how does it control us?

When the story opens a young women is tempted by a cake in a pastry shop. The cake, which is known as Gugelhupf, is offered to her by an old lady, Frau Hohenemb, a stranger whom she meets on the street who has carefully noted the scars on her knuckles. (Scarred knuckles are a sign of bulimia, caused by putting your hand in your mouth to make you gag.)

The young woman, who narrates the story, then accepts an invitation to go back to Frau Hohenemb’s house to eat the cake with a cup of tea. From thereon in, the young woman becomes trapped in a kind of interdependent relationship with the old lady who may, or may not, be Empress Sissi herself. Yes, I told you it was a bit bonkers.

Over the course of this short novel (it’s just 172 pages long), the young woman gets caught up in a whole bunch of strange activities involving Frau Hohenemb and her housekeeper, Ida, including blowing up a statue of the Empress, visiting a sex museum and  stealing a royal cocaine syringe on public display. Along the way the narrator’s past life as a bulimic is retriggered and she enters a new pattern of gorging and purging on food.

The Empress and the Cake is a grotesque sort of horror story that shows how the slow erosion of willpower can be detrimental to wellbeing. It also highlights the idea that control and power can come from unusual and unexpected sources. Greed, addiction and cruelty are all themes underpinning the central storyline. I read it with a mixture of fascination and abhorrence. Do try it if you are looking for something utterly different to anything you’ve read before.