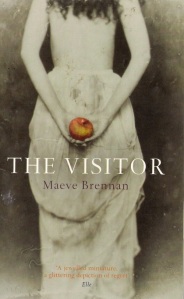 Maeve Brennan’s The Visitor is one of those exquisite novellas that encapsulates everything that is good about literature in one tiny, fierce package.

It was first published in 2000, seven years after the author’s death, and its discovery was something of an accident. According to the “Editor’s Note” in this edition, the typescript was acquired by the library of Notre Dame University, when it purchased a job lot of business files from the Catholic publishers Sheed & Ward in 1982. No one seems to know exactly how the novella came to be in Sheed & Ward’s possession, but it’s believed that it was probably written by Brennan in the mid-1940s.

By all accounts Brennan was an interesting character. Her Wikipedia entry states that she was born in Dublin in 1917 but moved to the USA in 1934 when her father became the first Irish ambassador to the country. She later lived in Manhattan, where she famously worked on The New Yorker magazine as a columnist and short-story writer. Her talent and beauty marked her as one to watch, but she had little eccentricities which later grew into mental illness. By the 1970s she was an alcoholic and homeless. She died in 1993 after years of hospitalisation.

The Visitor, easily devoured in one sitting, is a bittersweet homecoming story in which22-year-old Anastasia returns to Dublin after living in Paris for six years with her mother. Her mother died a month ago, so Anastasia is at a bit of a loose end. Her best option is to go back to the house in which she was raised to live with her paternal grandmother, Mrs King, who is still grieving over the death of her son — Anastasia’s father.

But this is where things go a little awry, because Mrs King is a hard woman with nary a charitable bone in her body. She does not want Anastasia to live with her. She is distant and cold, her voice “cool and unemphatic”, and she “smiles with anger”.

In a narrative that swings between the past and the present, we learn that Mrs King never liked her daughter-in-law, who was much younger than her son and prone to emotional outbursts at the breakfast table. She believes that “she disgraced us all, running off the way she did, like some kind of madwoman”.

Similarly, she fails to understand Anastasia’s situation at the time:

Mrs King said in her gentle voice, “You know, Anastasia, you made a serious choice when you decided to stay with your mother in Paris. You were sixteen then, not a child. You knew what she had done. You were aware of the effect it was having on your father.”

She turned the spectacles thoughtfully in her hands.

“Didn’t you know what state he was in, when he left you in Paris, after trying to get you to come back here, and had to come alone?”

“Oh, Grandmother,” cried Anastasia, “how could I leave her?”

The tension between these two women of different generations — the younger who brims with emotion and the older who keeps emotion at bay — is what makes this novella such a riveting read. And because both of them have different loyalties —  a daughter trying to do the best thing by her mother, and a mother wanting the best for her son — means they will never see eye to eye. The crucial point is that Anastasia is willing to move on emotionally, to let bygones be bygones, but her grandmother is not.

While Mrs King comes off as a monstrous creation, her cool, calm manner makes her totally believable. She never becomes a caricature. But she only truly works in stark contrast to Anastasia, who is a young woman full of love for those around her, including Mrs King’s housemaid, Katherine, whom she lavishes with Christmas presents, and Mrs King’s elderly friend, Miss Kilbride, whom she visits regularly for tea and cake. In fact, Anastasia is so desperate to be loved in return she cannot comprehend her grandmother’s inability to make her feel at home in her home.

This is a story about love and loss, about grief and death, about relationships between children and their parents, and how our loyalties can be skewed by all kinds of things, including jealousy, prejudice and age. It’s also a story that focuses on nostalgia, atonement and our inability to correct past wrongs. But ultimately, The Visitor focuses on the notion of home: what it is, where it can be found and how it affects you when it changes in your absence.

Although I had heard about this novella in the vaguest of terms over the years, I must thank Claire from Paperback Reader for reminding me that it was a book I had to read.