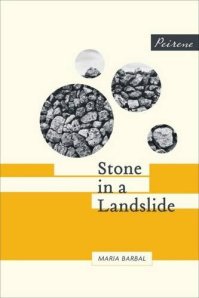 If you read the same blogs as I do, no doubt you will have seen very many glowing and positive reviews of this one, the second to be published by new independent press Peirene. (I actually purchased this as a three-book set: the first book, Beside the Sea, was a hugely emotional read; and I am yet to read Portrait of the Mother as a Young Woman, which will be published in September.)

Stone in a Landslide was first published in 1985 in Catalan as Pedra de Tartera, but this is the first time it has been published in English.

Written in a very sparse style, it tells the life story of an uneducated rural woman, who is born into a peasant family in the Catalan Pyrenees in the late 19th century. Her name is Concepció, but her family call her Conxa:

I was convinced that a Conxa would be fat and beefy and, since I was so thin, when people asked my name I always thought they would burst out laughing and I’d feel bad. But Jaume [her husband] told me that saying my name was like eating a sweet, that it was the name of something small and delicious that he liked very much. It was as if he’d been born to take away my fears, to bring light where I saw darkness and to flatten what felt like a mountain to me.

In just 126 pages (and dozens of very very short chapters, some of which are only two or three pages long) Conxa’s story covers a lot of ground at a clipping pace. Written from the perspective of an old woman, now retired in Barcelona, she recalls her life as a 13-year-old dispatched to work for her aunt and uncle in another village, her courtship, marriage and motherhood.

Conxa’s gentle, timeless voice conveys the joy of her simple yet hard-working life, but this all comes to an unexpected and abrupt halt with the onset of the Spanish Civil War.

Little by little news comes. Some people talk about fighting and deaths in the south of Spain…others talk about atrocities in Barcelona. They say that the priests have gone into hiding. Ours hasn’t been seen for two days. Jaume is exultant. He keeps saying that what the people have decided freely cannot easily be set aside, not even with guns. What does he mean, the people? The people means all the men and women who live in this country. I back away from these conversations and feel suffocated. Better not to ask anything.

Conxa’s resultant confusion, and fear, resonates off the page. Life, once so simple, becomes complicated; the social becomes political; the local becomes national.

Sadly, such big events, including the major milestones in Conxa’s life (births, deaths, marriages) are given scant regard in the text: there just isn’t the space.

And while the author may have wanted to convey the simplicity of a rural woman’s experience (Conxa is largely unfamiliar with the world beyond the fields she tends), I read the entire book feeling like an observer, and not a participant.  As a result, I didn’t love this book as much as I expected, but I did enjoy being in the company of this quiet, reflective character.