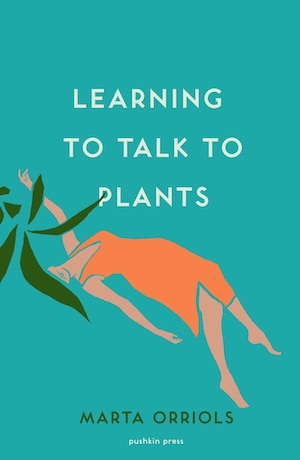 Marta Orriols’ Learning to Talk to Plants is an age-old story about a woman grieving the untimely death of her long-time partner, only there’s a crucial twist — just hours before he dies in a cycling accident, he announces that he is leaving her for someone else.

Paula, the central character, is a neonatologist, a doctor who specialises in the care of newborn babies, particularly those who are ill or born prematurely. She works in a busy hospital in Barcelona and spends more time with her colleagues than her partner, Mauro, who works in book publishing.

She is unaware that Mauro is pursuing an affair, so his admission, at a carefully arranged dinner, is a shock. That shock is only superseded when he is killed cycling home just a few hours later. Her grief is compounded by the fact that she keeps Mauro’s desertion to herself; to tell family that he had left her would only tarnish their well-held opinion of him — and she refuses to do that.

The novel charts the ways in which 40-something Paula tries to make sense of her new reality. She throws herself into work, pursues a love affair with a beguiling stranger she met in Amsterdam, and grows closer to her beloved father who raised her singlehandedly after the untimely death of her mother.

But as she navigates this new existence, she is plagued by thoughts of Mauro. Why did he find it necessary to seek love elsewhere? And who was the woman that captured his heart?

This intelligent and introspective novel won the Omnium Cultural Prize for Best Catalan novel in 2018 and was translated into English last year.

I found it a little uneven in terms of pacing, and the style is similarly patchy, with some elements written in eloquent, deeply thoughtful prose and others reading like a (high-brow) romance novel.

But the story is a good twist on the “grief novel” — one largely focused on a character coming to terms with the death of a loved one — and explores all kinds of issues, including love, trust, betrayal and loyalty. It’s also a story about family and how we are shaped by our childhood experiences.

And it’s full of metaphors — the babies that Paula saves at work, for instance, not only add meaning to her life, they represent all the children she, herself, never got to have with Mauro. Similarly, when all the plants that Mauro grew begin to die, she does her utmost to rescue them, because they are the last living link with the man she never really knew.

Learning to Talk to Plants is an honest portrayal of grief and charts some dark moments. But it’s also blackly humorous in places and never suffocates under its own melancholic sense of sadness. There’s plenty of rage here too — at the injustice of being “widowed” when all you want to do is kill the man who’s left you!

‘Here is the Beehive’ by Sarah Crossan: A fast-paced novel written from the perspective of the other woman whose lover dies after a three-year illicit relationship.

This is my 14th book for #TBR21 in which I’m planning to read 21 books from my TBR between 1 January and 31 May 2021. I purchased it from my local independent book shop when it was published last year mainly because I am interested in reading more Catalan fiction.