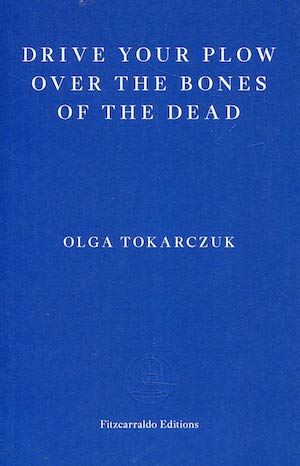 This morning I awoke to the news that Olga Tokarczuk’s Drive your Plow over the Bones of the Dead has been longlisted for this year’s Man Booker International Prize. (You can see the entire longlist on Tony’s blog.)

I read this excellent Polish novel last week because it had made the shortlist for the EBRD Literature Prize and I had been invited to the award ceremony and wanted to be up to speed with the nominations. (I had already read one of the other shortlisted titles, Soviet Milk by Nora Ikstena, translated from Latvian by Margita Gaelitis, which I absolutely adored, but ran out of time to read the winning book — Hamid Ismailov’s The Devils’ Dance — but hope to get to it soon.)

Tokarczuk actually won the Man Booker International Prize last year for her novel Flights, which earned her and her translator £25,000 apiece.  If she wins it again, I suspect she’ll be the first author to take the prize two years in a row.

Drive your Plow over the Bones of the Dead — the title comes from a book  by William Blake — stars an eccentric woman in her sixties who is an expert in astrology, loves William Blake and champions animal rights.

‘Its Animals show the truth about a country,’ I said. ‘Its attitude towards Animals. If people behave brutally towards Animals, no form of democracy is ever going help them, in fact nothing will at all.’

Janina Duszejko is the kind of woman who lives alone, preferring animals to people, and writes letters to those in authority when she sees something she doesn’t like or agree with.

A former construction engineer, she now works at a school teaching young children — “I always did my best to capture their attention fully, to have them remember important things not out of fear of a bad mark but out of genuine passion” — and her spare time keeping an eye on her neighbour’s second homes, which are locked up during the winter months, and translating the work of William Blake with a former student.

Set in a remote village in Poland, just across the border from the Czech Republic, the story is a deft mix of Janina’s subversive interior monologue combined with a criminal investigation into the deaths of several of her neighbours, who all died in mysterious circumstances. Janina’s theory, which she is keen to share with everyone, including the police, is that the murders were committed by animals as an act of vengeance: each victim is a hunter and the footprints of deer are always nearby.

A noirish book with a sense of humour

Lest you think the book is overly dark and noirish, I can assure you that it’s not. Yes, Janina is a bit crazy and yes, she admits she’s pessimistic — “I see everything as if in a dark mirror, as if through smoked glass. […]  I interpret everything as abnormal, terrible and threatening. I see nothing but Catastrophes” — but there’s a lot of humour in this book and Janina is wonderful company.

It was hard to have a conversation with Oddball. He was a man of very few words, and as it was impossible to talk, one had to keep silent. It’s hard work talking to some people, most often males. I have a Theory about it. With age, many men come down with testosterone autism, the symptoms of which are a gradual decline in social intelligence and capacity for interpersonal communication, as well as a reduced ability to formulate thoughts. The Person beset by this Ailment becomes taciturn and appears to be lost in contemplation. He develops an interest in various Tools and machinery, and he’s drawn to the Second World War and the biographies of famous people, mainly politicians and villains. His capacity to read novels almost entirely vanishes; testosterone autism disturbs the character’s psychological understanding. I think Oddball was suffering from this Ailment.

It’s a wonderfully atmospheric read, too, because Tokarczuk’s prose somehow captures the feeling of cold and snow and the beauty of nature during the winter. It feels very Eastern European in mood and setting, dripping as it does with melancholy and a kind of intellectual strangeness.

I’ve seen some descriptions of Drive your Plow over the Bones of the Dead as a crime novel, but I’m not sure I agree that’s the best way to sum up a story that refuses to be boxed in as such. This is a highly original novel, one that is as much about compassion and equality between humans and animals as it is about a string of mysterious deaths in a snowy setting. It’s not a police procedural, nor is it a straight philosophical anti-hunting text but it is an intriguing mix of both, with a lot of other stuff thrown in for good measure including themes of loneliness, independence and growing old.

It won’t be for everyone, but for me it was a rather thought-provoking read and has made me keen to try more by this best-selling Polish author.

This is my 9th book for #TBR40. I bought it on Kindle late last year, although I can’t quite remember what prompted me to buy it. I suspect it might have been off the back of her Man Booker International win…

Last Christmas I treated myself to all the Peirene Press titles that I did not currently own. My plan was to work my way through them over the course of this year. Alas, with so many books — and other obligations — vying for my attention, it was only last week that I managed to pull one from the pile: Hanna Krall’s Chasing the King of Hearts.

This book is not your usual Peirene fare in the sense that it’s a little too long to be classed as a novella (it certainly took me far longer than two hours to read it), but I’m not sure that really matters. The book is a tribute to one woman’s amazing ability to survive everything that World War Two throws at her, including the execution of various family members, life in the Warsaw Ghetto, several stints in jail, torture by a cruel Gestapo officer (was there any other kind?)  and  internment in Auschwitz. And that’s only the half of it.

A woman’s love for her husband

The story is framed around a love affair between a woman, Izolda Regensberg, and her husband, Shayek, the “King of Hearts” of the title, who is taken away by force to a concentration camp. Over the next few years, Izolda does everything in her power to be reunited with him — indeed, she becomes the “Queen of Chameleons”: she changes her name, her hair, her occupation and her religion. She finds new ways to make money — selling goods on the blackmarket and acting as a secret message courier — in order to fund her journey to find her beloved.

Her life is constantly in danger as she passes herself off as a blonde-haired Catholic — and for much of the time she gets away with it. But every now and then she doesn’t:

When the train stops at Radom the German takes her to the police station.
Evidently you look like a Jew, says the policeman.
She’s genuinely surprised: I look like a Jew? I’ve never heard that before.
Can you say your Hail Mary? the policeman asks.
Of course. Hail Mary, full of grace, the Lord is with the… […] Blessed art thou among women… Because she is addressing the Mother of God, who is full of grace, she goes slowly, making every word count, to show respect.
Listen to you, the policeman laughs out loud. What normal person says Hail Mary like that? Usually it’s hailmaryfullofgracethelordiswiththee… You really are a Jew!

But despite this little “hiccup” she remains steely, determined and astonishingly resilient. Nothing ever seems to faze her: not even broken shoulders and a knocked out tooth. She simply dusts herself off and continues her quest.

And it is a quest in the truest sense of the word, for Izolda comes across so many challenges and obstacles and tests of courage, yet she never gives in. Not even the horrors of Auschwitz can dent her perseverance or enthusiasm. Indeed, she’s so self-assured she approaches Dr Mengele for a job!

As you might imagine for a book that covers so much geographical territory —Vienna, Warsaw and countless other towns — the narrative has a rather fast pace. Sometimes events move so quickly it’s hard to keep up —  it’s a catalogue of train journeys, some taken on purpose, others by force  — and reads like a woman’s own adventure story.

The prose style is neat and clipped. It’s written in the third person but in the present tense, which lends the story a sense of immediacy, and it brims with tension throughout. It’s not sensational in the Hollywood sense, but it is a magnificent story told with exceptional restraint. Despite being set during the Holocaust, there’s not a shred of sentimentality or pity in it.

And yet it’s never quite clear whether Izolda’s love is truly reciprocated, and her inner life, along with Shayek himself, is frustratingly unknowable because she’s so stoic and self-contained. But on the whole Chasing the King of Hearts is the kind of story that makes you marvel at humankind’s ability to adapt and survive in the face of so much adversity. It’s also the kind of story that I know will remain with me for a long time to come…