Lilliput Press, which is based in Dublin, is increasingly becoming my Irish publisher of choice. I’ve only read a handful of their books but I am yet to find a dud one. Kevin Casey’s State of Mind, first published in 2009, is no exception.

The story is set in Co. Wicklow in the 1970s and is loosely based on British author Frederick Forsyth’s experiences as a tax exile living in Ireland. Apparently Mr Forsyth upped sticks and moved back to the UK in 1980, because of kidnap fears.

In A State of Mind, the Forsyth character is played by Bill Cromer, a wealthy, best-selling author from England, who moves to Wicklow to take advantage of Ireland’s then tax-free concessions for those working in the creative industries. He brings his much younger German girlfriend, Ingrid, with him.

The story is not so much about Bill and Ingrid but about their neighbour, John Hughes, a former newspaper reporter, who turned his back on journalism to write novels — several of which were hugely successful and enabled him to buy a nice five-bedroom, two-bathroom house in the Wicklow countryside.

A serious case of writer’s block

But now John, who is the first person narrator of the story, is suffering a severe case of writer’s block. His wife Laura, who is an English-born radiographer, and his teenage daughter Rachael, don’t seem to mind that he now lives a life of “rural leisure and private desperation”.

It is the arrival of Bill and Ingrid into their rather sheltered community that unwittingly provides John with new material. The book opens with these fateful first lines: “This is an attempt to record the events of last summer. I want to understand what happened.”

Without giving away crucial plot spoilers, John begins an affair with Ingrid that has serious repercussions. As he jumps in and out of bed with her — taking advantage of his wife’s long commute to Dublin, his daughter’s absence at boarding school and Cromer’s trips back to the UK — there is more going on than meets the eye. Yes, he’s gathering material for his new book and finding out some painful truths about himself and his marriage, but he is also getting mired in something more dangerous: the local republicans have already marked Cromer as a target for blackmail and possible kidnap.

A State of Mind is one of those rare books that defies classification, because it’s part sexy romance, part political thriller. It’s told in a very gentle, understated way, almost to the point of being flat, yet there’s something about the prose style — and the narrator’s limpid voice — that weaves a certain kind of spell. I found myself completely caught up in the story, wanting to know what was going to happen next. Was John going to get caught by his wife? Were the IRA going to bump him off as a case of mistaken identity? Would Ingrid call it quits?

There’s a lovely 1970s feel to the story too — it’s all cosy dinner parties, gin and tonics, and endless telephone calls on the landline — and setting it in Wicklow, among a small enclave of foreign writers, makes it even more intriguing. Lunch time visits to the pub will never be the same again!

Kevin Casey was once the Abbey Theatre’s youngest playwright. His novels include The Sinner’s Bell (1968), A Sense of Survival (1974) and Dreams of Revenge (1977). A State of Mind is his first book in more than 20 years. 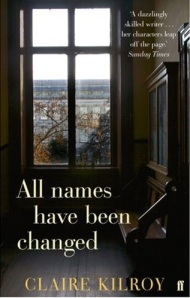 Claire Kilroy is a young Irish writer whose debut novel, All Summer, published in 2003, garnered much critical acclaim and earned her the 2004 Rooney Prize for Irish Literature. It was also shortlisted for the 2004 Kerry Group Irish Fiction Award.

Her second novel Tenderwire (2006), a literary thriller set in New York, was shortlisted for the 2007 Hughes and Hughes Irish Novel of the Year but lost out to Patrick McCabe’s Winterwood.  I read it last August and thought it was such an intelligent page-turner I was eager to read more of her work. So when I found out there was a new one on the way I asked Faber and Faber if they’d be kind enough to send me a proof copy, and they obliged.

Sadly, I found it very difficult to “get into” All Names Have Been Changed and I put it aside, hoping I might find it more rewarding if I picked it up at another time. And so it lay abandoned on my bedside table for almost two months, until I picked it up last night to give it another try. This time the book seemed more readable and I eagerly made my way through the remaining 100 or so pages, but ultimately I found it disappointing in comparison to Tenderwire.

The book is set in 1980s Dublin and is about a group of creative writing students at Trinity College who become dangerously obsessed with their tutor, the world-famous PJ Glynn. It is narrated by Declan, the only male student in the class of five, but not much seems to happen and before long, as harsh as this will sound, the reader begins to wonder whether there is any point in ploughing on.

Because this is a book about group dynamics and personalities, it seems odd that none of the characters, bar Glynn, a stereotypical drunk Irishman, and Declan, the impoverished student, are particularly memorable. Perhaps it was just me, but the others — Antonia, Aisling, Faye and Guinevere — seemed indistinguishable from each other, so I could never quite remember which one was the mature student, which one was the Goth and which one was rumoured to be abused by her husband. This seems a fundamental flaw given this is essentially a story about writing.

But, in a way, it is this examination of what it is to be a writer that makes All Names Have Been Changed such an interesting read. If you have ever participated in a writing class or idolised a particular author, then much of the content will resonate.

There’s a lot of literary in-jokes here, too, and probably far too many of them went over my head, but it becomes apparent as the story moves on that the participants in the group find themselves acting out roles in a novel. Indeed, at one point, Declan realises that he is no longer aping Glynn but the characters in Glynn’s books.

And Kilroy takes it further by giving each chapter a title taken from a real-life Irish book or song — for example, I don’t like Mondays; The Book of Evidence; The pipes, the pipes are calling; and Tarry Glynn — half the fun of which is identifying their source.

Such a gloomy, sombre novel — remember, this is set during a time when the length of Dublin’s dole queues were notorious and the city was in the grip of a heroin epidemic — begs for this light relief, but I’m not sure the dark humour truly works.

While Kilroy’s prose cannot be faulted (the oft-used phrase “beautifully written” has never been more apt) and the tone is measured and the atmosphere suitably claustrophobic, it feels as if something is missing. I suspect it might be a tighter plot, because even as a character-driven novel I don’t think All Names Have Been Changed quite pulls it off. You might beg to differ.

Night Letters was published in Australia to critical acclaim in 1996.

Picking it up, it’s hard to work out if it is a fictional story or a real-life travel memoir. This confusion is aided by its subtitle — A Journey Through Switzerland and Italy — and the note which claims it is “edited and annotated by Igor Miazmov”. But for those who aren’t quite sure, this is a novel and Miazmov is none other than Dessaix under another name. (Quite hilarious, then, to see that Amazon.co.uk lists Miazmov as if he is a real editor.)

The book comprises a series of 20 letters written on consecutive nights by an Australian man staying in a Venice hotel. The man, who is named Robert, has been diagnosed with an incurable illness and while the disease is never named one gets the impression that it is HIV.

These letters, which are not addressed to anyone in particular (but are effectively you, the reader), are filled with Robert’s wide-ranging thoughts on travel, love, religion and mortality. But the common theme, which threads in and out of the often meandering narrative, is man’s search for paradise and whether, in fact, it exists. This is underpinned by references to Dante’s The Divine Comedy, which Robert is reading out of sequence, so that when he finishes Paradise he feels “oddly becalmed […] if that didn’t bring you to a point of absolute stillness, nothing would”.

As Robert narrates his often mundane, sometimes frustrating and occasionally menacing travels through Locarno, Vicenza and Padua, he offers fascinating glimpses of the people and places he encounters along the way.

In Locarno he befriends an English woman wearing a mysterious amulet — “a hugely endowed male copulating with a large-limbed female, all in exquisitely fine detail, every bead in the bracelets, every toe picked out” — who spends days telling him about the history of the tiny gold brooch she wears. And in Venice he meets another hotel resident, a German professor, with whom he shares many discourses on history and philosophy, mainly on how the famous Venetian residents Cassanova and Marco Polo represented “completely different ways of travelling — and therefore of living out your life”.

I have to admit that Night Letters initially failed to win me over. I actually considered abandoning it. But I’m glad I persevered, because once I understood this was a novel about storytelling — there are references to famous novelists throughout, including Patricia Highsmith, Ruth Rendell and Salman Rushdie — I truly enjoyed it. There are stories within stories, and once you realise that these all combine weight to Robert’s search for meaning, you wonder why you didn’t “get” this much earlier.

What I loved most about this book — aside from the gorgeously authentic descriptions of modern Venice and the very funny footnotes by “Igor Miazmov” — are the insights into human nature and what it is to truly live. There are little gems dotted on every page — for example, Robert realises that the journey of life is not about getting to the destination, which is effectively death, but in experiencing each moment as fully as one can, and I love this passage, which seems so eloquent and true to me:

Journeying is, after all, so fundamental to the way we humans think of ourselves and assign our lives a meaning. Every second book you read is about some kind of journey, really, isn’t it? And we constantly talk about paths in life — ways, roads, progress, stages and so on — all travel metaphors, when you think about it.

In fact, I had to do everything within my power not to underline about 90 per cent of the sentences in this book, because so many of them resonated with me.

Night Letters is an incredibly subtle novel, but it’s a wise one too. It won’t appeal to everyone, but I loved its intelligence, its humanity and its big-picture look at life, so much so that when I got to the last page I immediately wanted to turn to the front to read it all over again — and that doesn’t happen very often. And do read it if, like me, you have a penchant for anything set in Venice — Dessaix captures the city so perfectly you’ll be rushing to book your air flights!