Today’s guest is author and journalist Leo Benedictus, whose debut novel The Afterparty, has been longlisted for the Desmond Elliot Prize and shortlisted for the London Book Award. I gave it a five-star review earlier this year.

Leo, who was born in London in 1975, studied English at Oxford University. His career has included copywriting, reporting, sub-editing and feature writing. He currently writes for the Guardian, where his work has garnered several awards, including feature writer of the year in 2007/08 (WorldWork Media Awards).

I am grateful for that “A”. There are just so many favourites, not all of them remotely highbrow. (Steven Pile’s Return of Heroic Failures had me crying with laughter more or less throughout my teens.) I’ve gone for Couples, though, because by jingo there’s a book! It absolutely hums with what may well be, if anybody ever ranks them, the greatest of all literary virtues: bravery. Fifty years later, I still would never dare to write something so toweringly graphic, sexually. And the style, being Updike’s, is remorselessly Baroque. “Over-the-top,” many would say. The hero is also, or at least he felt to me, misogynistic. In part, this is surely a result of the book’s age, and it is certainly not appealing. But if we love novels for their capacity to show us the insides of other people’s minds, then it is the minds that disgust us – surely – that merit most attention. I want to read about misogynists. 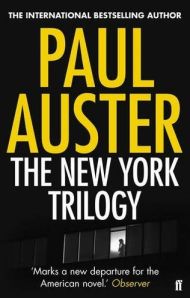 A book that changed my life: The New York Trilogy by Paul Auster

This book won a coin-toss against Earthly Powers — Burgess’s novel is probably the one, more than any other, which made me want to write a few myself. But reading Auster’s stories showed me where I wanted to go. There is a moment early in the first title in the trilogy, City of Glass, when the hero picks up a ringing phone in the middle of the night and says, “Hello?” At which, a voice says back to him, “Is this Paul Auster?” I still remember the instant that I read that line, and the drug-like exhilaration which came with it. I was an English graduate in my early twenties, I had read quite a few novels by then, but it had never occurred to me that this – the real author suddenly appearing in their own fiction – was possible. It was frightening and wonderful. Suddenly, all bets were off.

A book that deserves a wider audience: One Day by Ardashir Vakil

On the whole, I do believe that those books which most conspicuously deserve a wide audience get one. (And I intend to keep believing this until my own writing career begins its unjust descent.) That said, there certainly are some obscure books I’ve loved. Dubravka Ugresic is well worth looking up, for instance. Lend Me Your Character is a brilliantly funny and inventive collection of stories.

I’ve picked Ardashir Vakil’s One Day, however, because it is about this exact problem. It is Vakil’s second novel, following a successful first, which tells the story of a married couple struggling with unspoken differences while they prepare for their young son’s birthday party. The husband Ben is a blocked writer; two of their friends are successful Anglo-Indian authors. It epitomises, in short, the reviled “Hampstead novel” – a book written by, concerned with, and sold to, the same minuscule demographic. Yet, brilliantly, the whole thing is also a satire on itself.

I read it when it came out, eight years ago, as an act of comic seppuku by a novelist who could not bear the literary world he had just triumphed in. In an incompetent review, I got carried away and called the book “an ironic masterpiece”. Aptly, Vakil has published no more since. Another One Day, even more apt, is now one of the most successful novels of the decade.

Thanks, Leo, for taking part in my Triple Choice Tuesday!

I read Couples last year (review here) and loved it. I had assumed the book would not be to my tastes, but I was pleasantly surprised at how much I enjoyed it. It certainly made me more interested in exploring the rest of Updike’s back catalogue. New York Trilogy is one of my favourite books of all time (it was the first book up for discussion in Reading Matters’ now defunct online book group) and I very clearly remember that phone call that Leo refers to here: it made me think, WTF? Not read One Day but will need to hunt it out…

What do you think of Leo’s choices? Have you read any of these books?