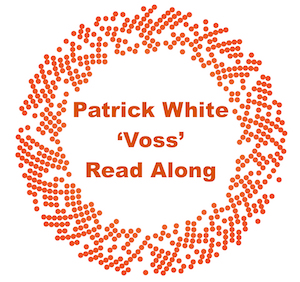 Patrick White is Australia’s only recipient of the Nobel Prize for Literature, which he received in 1973. At that time his body of work included nine novels, one short story collection, many poems and several plays. He went on to write very many more works (a total of 12 novels, three short story collections and eight plays) before his death, in 1990, aged 78.

He is widely regarded as one of the most important English-language novelists of the 20th century.

I have read three of his books — The Tree of Man, The Vivisector and The Solid Mandala (the latter two have been reviewed on this site) — and have found them enjoyable and rewarding, if somewhat challenging.

I have several more of his novels in my TBR, so when Tony, who blogs at Messenger’s Booker, suggested a read along, I put up my hand to take part.

The book we will be reading is White’s Voss, which won the inaugural Miles Franklin Literary Award in 1957.

The British critic Robert McCrum, who named it on The Guardian’s 100 Best Novels, describes it as a “monumental novel” with “an archetypal power”.

The blurb on the back of my Vintage Classics edition (pictured), published in 1994, describes the story as such:

Set in nineteenth-century Australia, Voss is the story of the secret passion between an explorer and a naive young woman. Although they have met only a few times, Voss and Laura are joined by overwhelming, obsessive feelings for each other. Voss sets out to cross the continent, and as hardships, mutiny and betrayal whittle away his power to endure and to lead, his attachment to Laura gradually increases. Laura, waiting in Sydney, moves through the months of separation as if they were a dream and Voss the only reality.

The read along runs throughout March and several of us have agreed to do it —  Stu, who blogs at Winston’s Dad; Grant, who blogs at 1st Reading; and me — but you are welcome to join in. Indeed, the more the merrier. You don’t need a blog, you don’t need to write a review; just read along with us and join in any discussions on our blogs or on Twitter.

You can read more about the initiative at Tony’s blog.

21 thoughts on “Introducing the Patrick White ‘Voss’ Read Along”