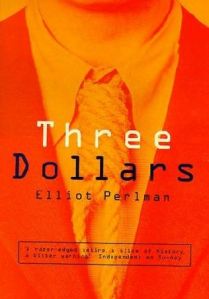 Eddie Harnovey, a 38-year-old chemical engineer, is married to a brilliant academic with whom he has a young daughter. He has a lovely house in the suburbs, a strong moral conscience and a kind, friendly nature. He is intelligent and well educated. Why, then, is his world falling around his feet? Why is he on the brink of bankruptcy with just $3 to his name?

This is the premise behind Elliot Perlman’s award-winning debut novel Three Dollars.

Essentially it charts the rise — and spectacular fall — of a young man, who could have had everything but looks set to lose it all, including his home and his marriage.

Set in Melbourne, Australia, during the economic rationalistic 1990s, it offers much commentary on our obsession with materialistic goods and the soulless nature of business and its pursuit of ever-increasing profit regardless of the environmental or social consequences. But it is also a look at how love can conquer all — as long as you have more than $3 to your name.

Overall, I much enjoyed this novel, reading it in the space of two days. As I mentioned when I reviewed Perlman’s Seven Types of Ambiguity earlier this year, it was refreshing to read an Australian novel set in modern times in a city I once lived and worked in.

Three Dollars is a serious book, with plenty of negative things to say about modern life, but this is tempered by a strong comedic element throughout. Some of the situations in which Eddie finds himself  border on being hilarious.

Genre-wise I’m not sure whether this book should be classed as a family drama, social realism, an environmental thriller, a love story or a black comedy. It pretty much covers all these bases with aplomb.

There were several things that grated though: the author’s tendency to editorialise; his over reliance on co-incidence to move the narrative along; and the use of overly long, convoluted sentences, a kind of literary vaudeville that cluttered what was otherwise a very
well written story.

All in all, a highly entertaining and intelligent read with believable characters and a rollicking good plot.