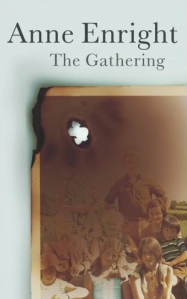 Grim and disturbing are the first words that spring to mind when describing Anne Enright’s Booker shortlisted The Gathering. But admid the dark, often depressing, subject matter there are chinks of light that make the novel surprisingly witty and, in a perverse kind of way, uplifting.

The story, which is set in Dublin, revolves around Veronica Hegarty, a 30-something wife and mother, who has escaped the clutches of her huge Irish Catholic family — she has eight siblings — only to be dragged right on back when her wayward brother, Liam, kills himself. Closest to him in age, Veronica is the one who must pick up the pieces — and bring back his body from England, where he drowned himself off Brighton Beach.

The first-person narrative is told in a stream-of-consciousness manner from Veronica’s perspective. She flits backwards and forwards in time, exploring her family’s dark history. She goes as far back as her grandparent’s generation as she tries to unravel the nub of the story, which is laid bare in the book’s opening lines:

I would like to write down what happened in my grandmother’s house the summer I was eight or nine, but I am not sure if it really did happen. I need to bear witness to an uncertain event. I feel it roaring inside me — this thing that may not have taken place. I don’t even know what name to put on it. I think you might call it a crime of the flesh, but the flesh is long fallen away and I am not sure what hurt may linger in the bones.

During the course of the book, which spans Liam’s death through to his funeral, Veronica traces the sexual history of the family. There’s a lot of shocking stuff here — crass descriptions of love-making and the like — which may be too much for prudish readers to bare.

But through this crude language we glimpse Veronica’s obsessions and see how her personality has been slightly damaged by her rough-and-tumble crowded childhood. Her pain and her anguish is never expressed to the outside world (she cannot even communicate with her husband), but is buried deep inside where it finds expression in Veronica’s self-loathing. If nothing else, The Gathering is a portrait of a lost woman coming to grips with her past, her present and her future.

This is a complicated book, one that requires more than one reading with which to fully come to grips. There’s a lot going on here, about family, about the ties that bind, about the fact we can never escape the past. It won’t be everyone’s cup of tea, it’s too grim and rambling and unfocussed for that, but I’m a big fan of Irish fiction and found this one did not disappoint. I don’t think it will win this year’s Booker, but its inclusion on the shortlist is a worthy one.

1 thought on “‘The Gathering’ by Anne Enright”