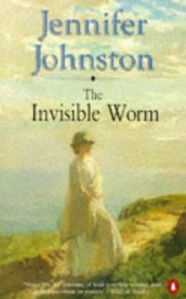 Irish novelist Jennifer Johnston has, in recent times, become one of my favourite writers. This book, her ninth, was first published in 1991. The cover* of my Penguin edition (which I acquired at no cost from BookMooch) is deceptive, because this is not the historical novel I came to expect but a very modern one about the long-lasting impact of child abuse on one woman’s life.

Despite the somewhat horrific subject matter, Johnston has created a delicately realised and completely unsentimental tale. In any other author’s hands I’m afraid this story about a family’s secret past would be elevated to melodrama, with everything spelt out in minute detail. But Johnston’s strength is her ability to weave a complicated narrative using an economical palette of words. As ever, it’s the things she does not say that make The Invisible Worm such an interesting, compelling read.

Set in an unspecified era — is it before the Second World War, immediately afterwards or in the 1980s, I could not tell — Laura Quinlan’s quiet existence is shattered by the presence of Dominic O’Hara, a former priest turned school teacher, who keeps her company whenever Maurice, her busy, but rather doting husband, is away on business. It is clear from the outset that her platonic relationship with Dominic has an undercurrent of sexual tension, but she seems happy to leave it unfulfilled.

Laura is 37 and childless, though not for want of trying.

A recluse who lives in a lovely big house by the sea, she spends her days reading and gardening. Occasionally she gives dinner parties for Maurice’s colleagues, where she is renowned for her “very good cake”. But on the whole she seems a lonely, troubled woman who refuses to engage with other people or other places, content to stay at home and “guard this mad museum, the curator of my ancestor’s folly”.

When the story opens Laura is getting ready to attend the funeral of her father, a man held in such high regard by others that the Irish president and a “distinguished congregation” attend the service. But Laura’s inner thoughts — “The hole that they dig for you won’t be deep enough, dear Father” — reveal a hatred that seems slightly repellent, if intriguing, to the reader.

It’s only later, when she meets Dominic, that she feels compelled to tell him a little of her dark, hidden past, as if she is confessing her sins to the priest he once was. And slowly, while the pair get to work unearthing the much-neglected summerhouse that once belonged to her long-dead mother, layers of the family’s history are peeled back to reveal the rotten core. The denouement, when it comes, is heart-thumpingly shocking, matched only by the quiet devastation of the aftermath.

For anyone contemplating reading The Invisible Worm I offer a couple of caveats.

This is a simple story, but it jumps backwards and forwards in time and the lack of detail in the bare-boned prose takes a little getting used to, particularly if you are not familiar with Johnston’s style.

There are little literary flourishes to contend with too, such as the constant switching between third person and first person narratives, which can make things confusing, and the sometimes ambiguous conversations between characters, full of interruptions and stilted language, can be difficult to comprehend. The secret, I have found, is to read Johnston’s novels — this one included — in large chunks, rather than snatches here and there. You need to let the language wash over you so that you can find the rhythm of it. You will then find it difficult to let go.

* The cover shows A Summer Afternoon by Sir William Orpen, an Irish painter who died in 1931.

3 thoughts on “‘The Invisible Worm’ by Jennifer Johnston”