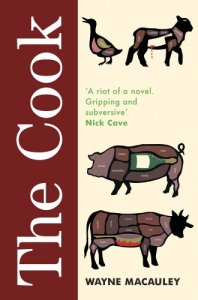 I thought the Brits were obsessed with cooking shows and celebrity chefs, until I got sucked into watching MasterChef Australia on satellite TV last year.  The series, which is based on the original British MasterChef but is 100 times more sensational and loud and bombastic, was screened six nights a week for several months and turned cooking into an Olympic-like sport. It was so over-the-top ridiculous (and puffed-up) that most of the time I watched it so that I could take the mickey out of the contestants rather than because I wanted to learn about fine dining.

So it’s no surprise that it took an Australian author to prick the bubble of pretentiousness which surrounds “celebrity” cooking and the entire “foodie” industry. But Wayne Macauley‘s The Cook is more than just a brilliant satire, it’s a viciously funny black comedy with an oh-my-goodness-I-didn’t-see-that-coming shock ending.

Learning to become a chef

The story is narrated by 17-year-old Zac, a young criminal who is given a choice: he can go to a young offender’s institute or enrol in a rehabilitation scheme that teaches teenagers how to cook. (Think Jamie Oliver’s Fifteen apprentice programme, which was turned into a television show about ten years ago.)

Zac chooses to go to the cooking school, which is presided over by a rich and glamorous Head Chef, who is rarely seen (if this book was turned into a film, Head Chef would probably be played by Gordon Ramsay). The students are taught to “do restaurant food top-class top-shelf” by Sous Chef Fabian, a hard-working but rather stressed out character, with a heavy emphasis on provenance (they grow their own fruit, vegetables and meat) and French gastronomy.

Zac discovers that he is rather natural cook and becomes slightly obsessive about food and goes to extraordinary lengths to raise lambs (and later ducks) that taste exceptionally delicious based on the kinds of food that they are fed and the ways in which they are slaughtered. He becomes so good at cooking that he is offered a job as a private chef before he finishes the course — and so that is how he ends up working for a rather rich family “in one of the best suburbs of Melbourne”.

The Cook is essentially a book of two halves: the first is all about Zac’s time at cooking school; the second follows his exploits living with and working for middle-aged housewife Deidre Fletcher — “but you must call me Mistress” — her rich husband and their two spoilt teenage daughters, Melody and Jade. It is while working as the Fletcher’s private chef that Zac begins to dream big — all his experience, hard work, passion and drive is one route towards getting his own restaurant sometime in the future.

The most interesting thing about this novel is the narrator’s voice, which is honest and intimate. It’s also semi-literate, because the book is written without the use of commas. This can take some getting used to, but once you find the rhythm this is an exceptionally clever literary device because you immediately assume that Zac’s not the sharpest tool in the box and feel some empathy towards him. And because he is prepared to work hard to get what he wants, this endears him to you even more. It’s only later that you begin to wonder if he might not have taken his obsession just a step too far.

Much of the book is laugh out loud funny. I really loved the way it pokes fun, tongue-in-cheek style at the way restaurant food is described grandiose-style on TV and in the press. And Macauley’s commentary on the restaurant business, in which the chefs are there merely to serve rich people who can afford expensive gourmet meals, seems to be exceptionally biting — and probably accurate.

I found the entire tale deliciously dark and subversive and on more than one occasion I was reminded of Michel Faber’s Under the Skin, which treads similar territory. The Cook is a deeply unsettling read but it’s a thrilling one, too, and the ending came as quite a shock. I know that I will be thinking about it for a long time to come — and I’ll probably never look at an episode of MasterChef in quite the same way again.

For another take on this novel, please visit Jackie’s review at Farmlane Books.

Note that this book is yet to be published in the USA, although an ebook version is available.

8 thoughts on “‘The Cook’ by Wayne Macauley”