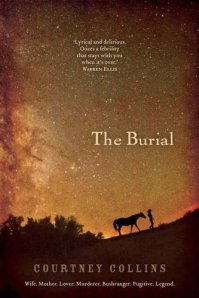 Courtney Collins’ The Burial is such an extraordinarily powerful book it’s hard to believe it was written by a first-time novelist. From the opening line — “If the dirt could speak, whose story would it tell?” — to the closing sentence, I was held in thrall by the exquisite prose, the luscious descriptions of the bush and a cast of curious well-drawn characters. But most of all I was captivated by the storytelling.

The Burial tells the tale of Jessie Hickman, a female bushranger who rustles horses and duffs cattle, in the years after the Great War. The book opens in dramatic style: she’s just given birth to a premature baby while on the run and she’s buried it alive.

In a distinctive and unusual twist, it is the dead baby that narrates the story — a literary device that feels more natural and less showy or intrusive than you might initially expect. Indeed, the baby has so much sympathy for her mother, that you immediately warm to Jessie despite her track record as livestock thief, convict and murderer.

Through a series of flashbacks we learn about Jessie’s colourful past, which includes a stint as a circus rider and a two-year stretch in prison.  We also learn how she was apprenticed to Fitzgerald “Fitz” Henry, a fiery red-headed man living in a remote valley, to help him break in horses. She later marries Fitz, even though he treats her appallingly and is violent and abusive from the first day they met — any wonder she decides to do him in.

You might like to think of your own mother knitting blankets expanding outwards in all colours while you were in her womb. Or at worst vomiting into buckets. On the eve of my birth, my mother concertinaed my father while I lay inside her. Six foot, eight inches. She brought him down with the blunt side of an axe.

But this is not just Jessie’s story — the narrative also covers the two men who are on her trail: the opium-addicted Sergeant Barlow and the aboriginal tracker Jack Brown who secretly knows (and loves) Jessie but never lets on.

Adventure and romance with a Western feel

Part adventure tale, part romance, part Western (but without the gunslinging), The Burial has already earned Collins comparisons with Cormac McCarthy. I haven’t read enough of McCarthy’s work to tell whether the praise is justified, but I did find it reminiscent of Paulette Jiles’ civil war novel Enemy Women, which I loved when I read it more than a decade ago.

There’s a beautiful, haunting quality to the writing, which brings to life a diverse range of characters, as well as an Australian landscape of heavily wooded mountains and big open star-filled skies.

And Jessie, who is based on a real female bushranger, is wonderful company: feisty, unafraid, daring and brave.

The Burial is a dazzling book and one that has already garnered critical acclaim and prize nominations aplenty in Australia. It has been optioned for a feature film, which is hardly surprising — Collins writes with an eye for detail without ever losing sense of the bigger picture, which is to tell a dramatic story in a visual and exhilarating way.  It will be published in the UK by Allen and Unwin on May 2.

20 thoughts on “‘The Burial’ by Courtney Collins”