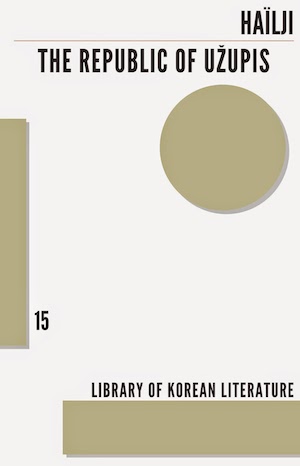 Fiction – paperback; Dalkey Archive; 150 pages; 2014. Translated from the Korean by Bruce and Ju-Chan Fulton. Review copy courtesy of the publisher.

I love reading books from non-English speaking countries because it’s the best (and cheapest) way of getting to know new and unfamiliar cultures and to experience the world through different eyes.

With that in mind, it might seem odd that my first foray into a book translated from the Korean language wasn’t actually set in Korea: instead Haïlji’s The Republic of Užupis, which is part of the Library of Korean Literature series — a joint venture between the Dalkey Archive Press and the Literature Translation Institute of Korea — is set in Lithuania.

But it proved a remarkable and entertaining journey — and if this slim volume is any indication of the state of Korean literature I’ll certainly be exploring more novels from this country in the future.

Stranger in a strange land

The book tells the story of Hal, a man in his early 40s from Korea, who arrives at Vilnius airport, hoping to bury his father’s ashes in his homeland known as the Republic of Užupis. But the immigration officer, who admits him into the country for 48 hours, doesn’t understand the reference. Later, when he asks a taxi driver to take him there, he’s met with a similar response:

“Where to, sir?”
[…] ‘Užupis,” said Hal.
‘Užupis?” said the driver, as if he had never heard of the name before.
“Yes, the Republic of Užupis.”
“Republic?” The man looked even more puzzled.
Hal produced a postcard and offered it to the driver. “Here’s the address. I think maybe it’s not so far from here. It’s postmarked Vilnius, Lithuania.”

As it turns out, the Republic of Užupis does exist — as this travel website clarifies — but only as a bohemian quarter on the other side of the river in Vilnius. But Hal is looking for something more substantial: a proper country with its own language and customs, yet he cannot find it and no one he meets along the way can take him there. This is despite the fact that he has family photographs proving the republic’s existence, can understand the language (but not speak it), knows its national anthem and flag, and swears his father was given a medal by the president.

Hal’s quest to find the republic becomes a kind of absurdist mystery, as the lines between what is real and what is not keep shifting and changing. As a reader, you never quite know if he’s looking for a real place or one that simply does not exist. And, by extension, you begin to wonder if the people he meets are real or is the whole journey a figment of his imagination?

The Republic of Užupis is essentially a novel about nationhood. What happens to people who lose their homelands through political boundary changes or annexation by other nations? And what is it like to be a stranger in a strange land looking for a place that no longer exists? Who should you trust? Who is responsible for authenticating history?

But while this might make the book sound rather heavy, let me assure you that it’s not. Instead it’s a rather delightful, intriguing and effortless read, which has been superbly translated by husband-and-wife team Bruce and Ju-Chan Fulton.

It’s incredibly atmospheric, particularly of place: everything is still, quiet, desolate; it’s cold and snowy; the buildings look “glum and distinctly the worse for wear”; and the icy streets, shrouded in mist, are lined on either side by piles of dirty snow.

The city was still overcast, and today it was shrouded as well, with barely thirty feet of visibility in any direction. Pedestrians emerged coughing from the fog to Hal’s left and coughed their way back into the fog on his right. The sodden chill that characterised the weather here must have made the local people susceptible to pneumonia. Before he realised it, Hal was coughing along with them.

The narrative is dotted with lots of recurrent motifs, and it’s filled with characters — menacing, helpful, exotic — who come and go, disappearing and reappearing like the fog that swathes the city.

Indeed, the mood and atmosphere reminded me very much of Japanese writer Taichi Yamada’s ghost story Strangers, perhaps because it’s so dreamlike and melancholic. But the narrative is also marked by whimsy and a kind of magic realism, yet it could not be truly classified as one genre or the other.

If you haven’t already guessed, I really loved The Republic of Užupis — it’s peculiar and occasionally baffling, particularly as the author plays with the notions of time and memory, but the wonderfully hypnotic prose casts a spell that is hard to shake off. This is actually the author’s tenth novel — what a shame it’s the only one currently available in English.

UPDATE: Tony, who blogs at Tony’s Reading List, has also reviewed this book. You can read his thoughts here.

6 thoughts on “‘The Republic of Užupis’ by Haïlji”