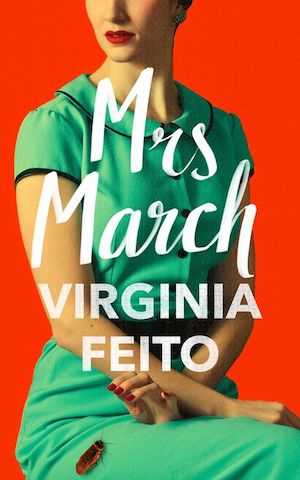 I have been reading some quite serious and heavy books recently (some of which are yet to be reviewed), so how delightful it was to pick up Virginia Feito’s Mrs March for some wickedly good fun!

Set in New York’s exclusive Upper East Side, this debut novel tells the story of the titular Mrs March, who is married to celebrated author George March, a man 11 years her senior, to whom she is devoted, mainly because of the status and wealth his success brings. (They’ve been married a long time and it’s fair to say her love for him has waned somewhat.)

So imagine her horror when one day, out buying her regulation olive bread from the local patisserie shop, she discovers that readers believe that Johanna, the lead character in George’s latest bestselling book, is based on her. She’s outraged because Johanna is a whore past her prime, and Mrs March is a fine upstanding citizen, albeit slightly fake and needy, who believes that appearances are everything.

Distraught by this news, she comes home and pulls George’s book from the shelf. In the acknowledgements she notices that she has been thanked as “a constant source of inspiration”:

Mrs March clutched her breast, breathing hard, faintly aware that tears were falling amidst convulsive gasps. Then she shook the book, smashed it against the desk, opened it to the author photograph on the jacket flap, clawed out George’s eyes, scratched out the threaded spine, and pulled out fistfuls of pages—which flew around the room like feathers.

Losing her grip on reality

From this moment on, Mrs March’s behaviour becomes increasingly more bizarre and deranged. Having snooped in George’s study for more evidence, she discovers a newspaper clipping of a young woman who has gone missing and she somehow gets it into her head that her husband has murdered her. What follows is a slippery slope of mental anguish and upset, morphing into paranoia and a conviction that her husband is guilty.

Mrs March’s behaviour becomes farcical. But there’s nothing she won’t stoop to — including impersonating an investigative journalist from the New York Times — in a bid to get to the truth.

Of course, a story like this can’t help but be wildly funny. I tittered a lot through this novel. The abhorrent behaviour of Mrs March, her undisguised but unconscious snobbery, made me laugh. Take this simple example:

As the party progressed, the living room fattening with each new arrival, Mrs March tasked Martha with attending to the guest bathroom regularly, to fold the towels and freshen the toilet seat and floor with a light ammonia solution. The sharp antiseptic vapors merged with the sticky, sappy scent of pine, creating a smell so distinct that guests would, on future visits to hospitals or upon passing a storekeeper emptying a bucket of mop water onto the street, instantly recall that last party at the Marches.

Or this little snide remark about the noise of clacking high heels in the apartment directly above:

She didn’t know who owned the apartment right above theirs, but every time she saw a woman in heels in the lobby she would consider approaching her, maybe befriending her so that one day she could mention, in a casual, offhand manner, the surprising benefits of house slippers.

As you can tell from these quotes, the story is written in the third person, but very much from Mrs March’s point of view. We really have no idea what goes on in the head of her husband, nor her young son, Jonathan, with whom she has a rather detached relationship.

A black comedy of manners

This is a book about manners, a black comedy, if you will, with a dark twist, and it’s written with a big nod to Patricia Highsmith and perhaps even Michael Dibden.

I really loved following Mrs March’s increasingly outrageous antics, but I also worried for her sanity — and wanted to let her know that maybe she should just take a chill pill! It’s unsettling and disturbing, hugely suspenseful and a terrific page-turner. Most of all, it is simply great fun.

A movie adaptation, starring Elisabeth Moss, has been slated. I suspect it will be a hoot!

For other takes on this novel, please see: