It’s that time of year again. Time to look back on a year’s worth of novels and choose the ones I liked most. You might think this would be a fairly difficult task, but it’s quite easy when you’ve employed a rating system. Essentially this list comprises all the books I awarded a five-star review in 2008.

‘The Attack’ by Yasmina Khadra (first published 2007)
‘Khadra definitely knows how to write a thrilling, often thought-provoking, narrative so that it forms one powerhouse of a novel that doesn’t shy away from exploring the wider implications of faith and cultural identity. Given the times in which we live, The Attack is an important book and one that will stay with me for a long, long time.

‘The Christmas Tree’ by Jennifer Johnston (1982)
Judging by the title alone The Christmas Tree sounds like it could be sentimental claptrap — and the somewhat dated illustration on my cover doesn’t do much to dispel that assumption. But this is truly a case of never judge a book by its cover, because what lies within is an exquisitely written tale about an Irish woman who returns home to die, and not once does Johnston resort to mawkishness or saccharine touches to achieve a deeply affecting story.’

‘The Crimson Petal and the White’ by Michel Faber (2003)
Despite the constant debauchery (for want of a better word) that fills the pages, The Crimson Petal and the White never feels pornographic, nor sensationalist. Instead, because Faber has such an eye for detail and is a stickler for historical accuracy, the novel feels like an intoxicating trip into a world that few of us could ever hope — or want — to visit.

‘The Ginger Man’ by J.P. Donleavy (1997)
There are some scenes that are laugh-out-loud funny; others so shockingly brutal you’re not sure you want to read on. I found myself not knowing whether I should be grimacing or chortling throughout. But it’s this very fine line between comedy and tragedy that makes The Ginger Man work — on so many different levels. The beauty of this rather marvellous novel is that it paints a very human portrait of a man so desperately troubled — financially, emotionally, mentally — that it’s hard not to empathise with him just a little.

‘The Man in the Gray Flannel Suit’ by Sloan Wilson (1955)
The Man in the Gray Flannel Suit is described as the quintessential 1950s novel, mainly because that’s the era in which it is set and written, but putting aside the sexism and the “traditional” family life — man goes to work, woman stays at home and looks after the children — depicted within its pages, it is still highly relevant and tackles themes and issues that are pertinent today.  For instance, at what point does one acknowledge that it is more important to enjoy one’s work than it is to make as much money as possible from something you detest? When do you stop worrying about the future and start enjoying the present? Should you tell people the truth or tell them what they want to hear? Is rampant consumerism the path to happiness?

‘Mariette in Ecstasy’ by Ron Hansen (1991)
‘This sparse, beautifully written novel, is an exquisite, mesmerising read. Open any page and the words are impeccably arranged to read like poetry.

‘Silent in the Grave’ by Deanna Raybourn (2008)
Silent in the Grave is a rollicking good story that ploughs along at a furious pace, ably assisted by page-turning cliff hangers at the end of each chapter, so that you begin to wonder whether you will ever put the book down! The plot is terrific, with enough red herrings to keep you guessing, right up until the dark and somewhat unexpected denouement.

‘The Sound of One Hand Clapping’ by Richard Flanagan (1997)
At its most basic level The Sound of One Hand Clapping is about the strained relationship between a father and daughter, but it is far more complicated than that, touching on a wide range of issues including poverty, alcoholism, domestic violence and wartime atrocities, all set within the social and historical context of Australia’s immigrant past.

‘The Spare Room’ by Helen Garner (2008)
This is a novel about death and friendship, about drawing lines and crossing them, about facing up to hard truths and shying away from things we’d rather not confront. But it also embraces other uncomfortable issues, including whether it is permissible to believe in alternative therapies if Western medicine does not have a solution, but all the while it never preaches, never comes across as heavy or patronising.

‘Tarry Flynn’ by Patrick Kavanagh (1948)
‘On the face of it, this book does not have much of a plot. It’s essentially a series of vignettes, held together by the passing seasons, but it is written in such beautiful, evocative prose, it’s difficult to find fault with the narrative. There’s a quiet, understated grace to every sentence that makes it a powerful and affecting read. I never thought I would say this, but I loved this book so much I’m afraid the late John McGahern, my favourite Irish writer and possibly my favourite writer per se,  has a rival for my affections.’

What books did you most enjoy this year? 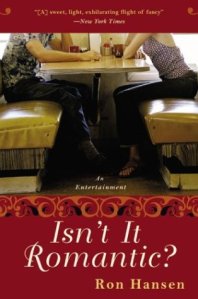 Isn’t It Romantic? An Entertainment is the literary equivalent of a light romantic comedy, probably with Jennifer Anniston and Ben Affleck in the lead roles.

I read it on the strength of Ron Hansen’s Mariette in Ecstasy, which I devoured — and loved — last month, but this book could not be more different in temperament, tone and subject matter.

It’s a delightfully quick, frothy read. The Chicago Tribune describes it as “A literary bonbon as sweet and light as meringue” which is pretty much a pitch-perfect summary. Although Isn’t It Romantic? An Entertainment feels contrived in places — with a light dusting of barely-there schmaltz — it’s a fun romp, and I raced through it in just four 20-minute tube journeys.

It opens with French tourist Natalie Clairvaux taking a solo bus trip across America. When her playboy fiancé, Pierre Smith, tracks her down the pair inadvertently become stranded in small town Nebraska. Here, the locals invite them to be king and queen of an annual three-day festival in which the town’s founder, a 19th-century trapper from Bordeaux, is honoured.

What ensues is a bit of a French farce in which Natalie is wooed by a 50-something rancher and Pierre is pursued by the attractive young waitress from the local diner. And when the town conspires to hold a wedding for the couple, no one is quite sure exactly which couple will walk down the aisle.

As silly as the plot sounds, there are quite a lot of laugh-out-loud moments in this book. And Hansen writes with such a deft hand, you can picture the scenes unravelling right before your very eyes. Indeed, the book would make a terrific film because it could so very easily be adapted into a screenplay. In fact, I’m surprised Hollywood hasn’t optioned it already — or maybe someone’s just waiting for Jennifer Anniston and Ben Affleck to become available, in which case I’d suggest you just hang out for the DVD… 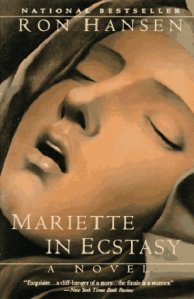 “One of the most acclaimed novels of 1991” screams the blurb of this book by acclaimed American writer Ron Hansen.

This doesn’t seem much of a recommendation to me, but how else would you market a book about a bunch of nuns living in a convent in upstate New York in 1906? Doesn’t sound like a particularly inspiring sort of story, does it? And yet this sparse, beautifully written novel, is an exquisite, mesmerising read. Open any page and the words are impeccably arranged to read like poetry.

Wide milk cows are tearing up green shocks of grass in the pasture. Each chews earnestly, like a slow machine, until the roots disappear in her mouth and she goes back to the grass again.

Mariette in Ecstasy is about a 17-year-old girl who joins the Sisters of the Crucifixion, where her much older blood sister is the Reverend Mother. Into this world of extreme religious devotion, Mariette offers a breath of much-needed fresh air. She is young, pretty and full of life. But she is also incredibly devout and believes that she can commune with Jesus to a much higher degree than the other nuns.

When Mariette begins to show signs of divine possession and begins bleeding from wounds in her hands, feet and side that resemble the crucifixion wounds of Jesus, the nuns close ranks. Is it a hoax or a miracle? Is Mariette duping them, or is she a saint?

I don’t think it’s spoiling the plot to point out that the book poses no answers. Hansen leaves it to the reader to make up their own mind, but this is not to say that the conclusion is unsatisfactory. Indeed, I found it to be incredibly clever — and wise.

But the real wisdom (and beauty) of this book is the way that Hansen arranges the story around the religious calendar and the changing seasons. In conveying the minutiae of daily life in a convent, the reader gets a real feel for the tedium and gentle rhythm of the nuns’ existence.

Mariette kneels on ginger-brown earth as she plants winter seeds in a hot-weather garden that Sister Saint-Luc has harrowed and Sister Saint-Pierre has grooved with a stick. Brussels sprouts, kale and savory cabbage. Sister Hermance is just behind her with a tin watering can. Sister Saint-Luc sings the hymn ‘Immaculate Mary’ and the sisters join her.
Hot breezes slide through the bluejoint grass. Sister Sabine is walking behind a horse-pulled thresher in the barley field. When Sister Hermance pours, she sees the water puddle like hot cocoa, but soon it is just a faint stain in the earth. Killdeer kite down and dally above Mariette, as if suddenly interested. Turtledoves watch from the telephone wire. And Sister Hermance thinks, We will have a bounty. Everything she touches will grow. Dirt puts itself in her hands.

But just as you get lulled into the gentle narrative style, a carefully placed paragraph jolts you awake. These startling paragraphs which all take the same form — dialogue between a priest and a succession of various nuns — are never explained. It is only as you get deeper into the novel that you realise they are from an inhouse investigation into Mariette’s stigmata.

By juxtaposing these testimonies with the seemingly dull but very strictly ordered day-to-day existence of the sisters, Hansen is able to ratchet up the suspense and create a sense of mystery and intrigue where none would otherwise lay. This “device”, if you could call it such, kept me spellbound, and I raced through this novel in the space of a morning.

The blurb might describe Mariette in Ecstasy as one of the best novels to come out of 1991, but I’d argue that it’s one of the best books I’ve ever had the pleasure of reading — and certainly the best one about nuns!