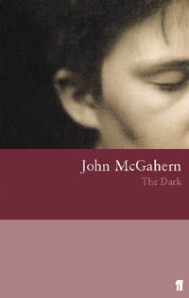 First published in 1965, this aptly titled book is about one boy’s painful adolescence and his confused, ambiguous relationship with his violent widower father.

Set in rural Ireland during the 1950s and 60s, the unnamed protagonist longs to escape his father’s abusive shadow. But the only real options open to him are the priesthood or the farm.

When he concentrates on his schoolwork and wins a scholarship to university, it looks like he might have found the escape route he was looking for. But how will he explain his decision to his cantankerous and manipulative father? And if he leaves, how will his younger siblings cope without anyone to defend them?

The Dark is John McGahern’s second novel. It is not quite as accomplished or as complicated as his first (although he does play around with point of view, which adds a level of inventiveness), but it is characterised by the same things that made his debut so striking: the prose is lovingly crafted and poetry-like; the subject matter is stark; the characterisation is painfully realistic; and the atmosphere is claustrophobic and oppressive but brims with possibility.

The Dark is very reminiscent of James Joyce’s A Portrait of the Artist as a Young Man in its depiction of a young teenager’s sexual awakening in a country constrained and constricted by the Catholic Church.

But there’s more to this book than “the sins of the body”. McGahern explores the complex love/hate relationship between his two main characters — the eager-to-please-but-resentful son and the moody-and-abusive father — with delicacy and aplomb.

Unbearably painful in places, it is a fascinating portrait of what it is like to be young and forced to make difficult choices that will impact on the rest of your life and your familial relationships.