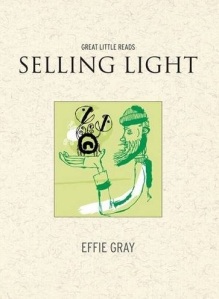 Effie Gray’s Selling Light is part of a new series of novellas published by London-based indie publishing house Roast Books. The books are billed as “great little reads” that can be easily consumed within “a long lunch hour or a single train journey”.

This is an attractive concept, especially for those bibliophiles who don’t want to lug around heavy paperbacks but need to be accompanied by a book at all times. Although not quite compact enough to fit in your back pocket, they’re light enough to carry in a bag — that’s if you’re brave enough to risk having them battered and scuffed, because these are handsome-looking volumes that look almost too good to read.

In much the same way as Persephone Books publishes all its books in attractive dovegrey covers with pretty endpapers, Roast Books has opted for highly textured cream covers with illustrations by Kenneth Andersson. They look very tasty indeed.

And the content is equally attractive if Selling Light is anything to go by. This is a gorgeous little tale about two loners who find themselves forging a fragile, hesitant friendship by the coast: Briege, is a young university student studying crabs, and George is an older man still grieving over the death of his wife eight years earlier. Both are living in caravans when Briege invites George on a crab-hunting expedition — and it is here that you get the sense that a little romance could develop if only the both of them were trusting enough to take it a step further.

But before they can get their acts together, their peace is shattered by the arrival of Peter Cooper, a young upstart, who throws a party in the nearby lighthouse and begins making plans to turn it into a “small deluxe guesthouse which he can manage from the city”. Meanwhile his “girlfriend” Amanda, who has a “parasitic attachment to others” realises that she “needs a new host” and begins casting around for one…

It’s a fascinating and beautifully told tale, one that lives up to Roast Books’ promise of delivering quality short works of fiction that are “easily digestible, instantly gratifying and, of course, extremely tasty little reads”. I’m very much looking forward to reading the others in the series.