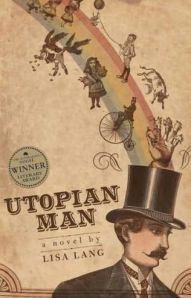 What a lovely surprise this Australian book turned out to be!

Lisa Lang’s debut novel, Utopian Man, was joint winner of the 2009 Australian/Vogel Literary Award. It is based on the life of  Edward William (E.W.) Cole, a legendary eccentric who built an amazing retail emporium in Melbourne during the 1880s.

His pièce de résistance was a fabulous three-storey book arcade, supposedly filled with a million books, where readers were encouraged to sit and browse and use like a library. This was later expanded to include a tea room, a conservatory and a live monkey display. Bands would perform regular lunch-time concerts there, too.

And if that wasn’t enough, Cole also installed a printing press to publish pamphlets (often political or issue-based) and his own books, mainly for children — indeed, many Australian readers of a certain vintage will be familiar with Cole’s Funny Picture Book, which was filled with poetry and puns and humorous drawings. (You can read this in its entirety on Project Gutenberg.)

This novel doesn’t really have a plot other than to chart E.W. Cole’s life in two-yearly increments. This allows you to see how his business expanded from the time of the arcade’s opening to his death in 1918 and gives you glimpses into his blissfully happy family life — he married a faithfully devoted much younger wife, Eliza, with whom he had six children, and they all lived in a rather lavish apartment (what we, today, might call a penthouse) above the book arcade.

But the narrative, which is written in a lovely Victorian-style prose, is far from predictable. There are little scandals and tragedies everywhere — including the unexpected death of Ruby, Cole’s 8-year-old daughter, to scarlet fever; an older son who becomes an opium addict; and an employee who steals the arcade’s takings — and there are brushes with extra-marital affairs, spiritualism and politics. In fact, Alfred Deakin, whom Australians know as the “father of federation”, has a starring role (he was a close friend of Cole’s, though that friendship came to a bitter end when Deakin became the second Prime Minister of Australia and helped usher in the White Australia Policy).

Interspersed throughout are flashbacks that recount Cole’s time on the goldfields, where he befriended a Chinese man when racism — the “yellow peril” — was rife. But while Cole made enough money on the diggings to escape — he set up a market stall selling books in Melbourne, the first step towards much greater commercial success — there are hints that something dark and troubling happened while he was searching for gold. You have to read a good two-thirds of the book to find out what that was — and I’m not about to reveal that here.

One of the most successful aspects of Utopian Man is the way in which Lang captures the mood and spirit of an ever-changing Melbourne during the late Victorian and early Federation periods. She manages to evoke a particular time and place so effortlessly that history truly comes alive in these pages. Here we have a provincial town turned into a booming metropolis thanks to the gold rush, but then the depression hits, the banks close and destitution is on every corner — but Cole, good-hearted man that he is, refuses to make any of his staff redundant and chooses instead to expand his business rather than consolidate it.

Indeed, I came away with the impression that Cole was not only hugely generous — perhaps to the point of being weak — he was a man before his time. He champions equality for all and cannot understand when people poo-poo his idea that the colour of a person’s skin does not matter, we are all human underneath. He seems, in many ways, to be almost too good to be true.

All in all, Utopian Man is a charming book, which is an utter delight to read. It will especially appeal to fans of Victorian-era novels and those who love books (I guess that’s all of you, then). And the best bit is it is readily available outside of Australia in both ebook and paperback editions — hoorah!