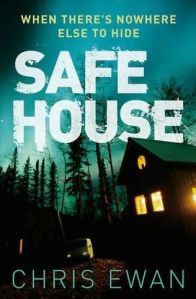 I could trot out the usual terminology — fast-paced, gripping, action-packed — to describe Chris Ewan’s Safe House, but this novel is slightly more than that. This is a highly intelligent thriller, one that is filled with so many twists and turns in the plot it’s impossible to guess the ending. I read it lounging by a swimming pool in Rhodes and loved every minute of its octane-fuelled narrative.

The story is set on the Isle of Man, synonymous with the legendary (and deadly) annual motorbike racing event the Isle of Man TT. The motorbike element is important, because when the book opens, local plumber Rob Hale has crashed his and is now in hospital. But when he asks about the female passenger riding pillion, no one knows what he is talking about — he was the only person found at the accident scene. So does this passenger actually exist, or is Rob losing his marbles?

Because Rob recently lost his sister to suicide, most people think the latter. But as we soon discover there’s a lot more here than meets the eye, and as Rob sets out to prove everyone wrong, the reader is taken on a journey that turns out to be more dangerous than a quick zip round the TT circuit.

From punch-ups to cover-ups, this is the kind of narrative that unfurls at a lightning pace — and you’re never quite sure who, or what, to believe.

The cast of characters in this action-thriller is a good one. Rob’s sense of bewilderment, outrage and distrust is perfectly pitched, and Rebecca Lewis, the private investigator drafted in by Rob’s parents, is a stand out — she’s intelligent, courageous and doesn’t do things by halves.

And while some of the action borders on near-surreal territory the further the story progresses — a downside of the genre, I would argue — the conspiracy at the heart of this novel never feels too outlandish to be true. That’s probably because the island setting — a tight-knit community with a small-town mentality — works in its favour; there have long been rumours that the Isle of Man is a safe haven, not only for tax exiles, but ex-security services personnel as well.

Safe House is a good, solid — and occasionally brutal — read, perfect for those who like their thrillers on the dark and edgy side.

It has been shortlisted for the 2013 Theakstons Old Peculier Crime Novel of the Year Award, which is announced on Thursday 18 July.