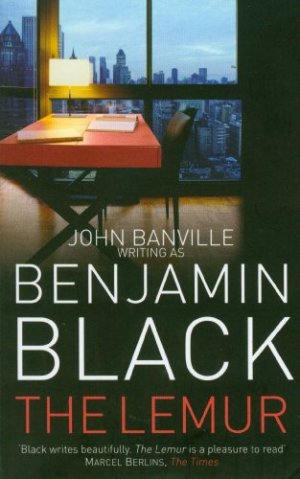 Ghostwriters or journalists who get themselves into trouble while researching the books that they are writing is not a new idea in fiction — think Robert Harris’ The Ghost and Alan Glynn’s Bloodland for a start. Into this “genre” comes The Lemur, a stand-alone novella by John Banville writing under the pseudonym Benjamin Black.

But this is not your average run-of-the-mill psychological thriller. Fast-paced and full of classy prose (and classy characters), it has all the hallmarks of a book that could have been written any time in the past 60 years: it feels like a good old-fashioned classic, with a nod to the likes of Graham Greene and Raymond Chandler, but is set in modern day Manhattan, with its glass canyons and chaotic streets ringing with the constant sound of police sirens.

The story is a slight one — a biographer hires a researcher who uncovers a dangerous secret but is murdered before the secret can be told — but in Black/Banville’s hands it feels like a much grander narrative.

A man with a secret

Essentially, The Lemur goes something like this: John Glass, a renowned Irish journalist, has married into a rich American family headed by billionaire William “Big Bill” Mulholland, a former CIA operative who has made his money in spyware electronics. When Mulholland discovers that another journalist, Wilson Cleaver, is planning a hostile biography of him, he hires his son-in-law, Glass, to pen the official version for the grand sum of $1million.

But Glass, feeling slightly out of his depth, decides to hire a researcher to help him on the project. And this is where he meets the “Lemur” of the title — a young researcher by the name of Dylan Riley, who already seems to know a lot about Mulholland. Glass is immediately suspicious of him, not the least because “with that long neck and little head and those big, shiny eyes, he bore a strong resemblance to one of the more exotic rodents”.

Things take a turn for a worse when a day after their first meeting Riley tries to blackmail Glass for $500,000:

“No, you look,” the Lemur said, in a new, harsh and suddenly unadolescent-sounding voice. “You used to be the real thing, Glass. A lot of us believed in you, followed your example. Now look at you.” He gave a snort of disgust. “Well, sell out to your father-in-law the spook if you like. Tell the world what a sterling guy he is, the unacknowledged Cold War conscience of the West, the man who urged negotiations with Castro and a safe passage for Allende to Russia — as if he’d have wanted to go, the poor schmuck. Go ahead, write his testament, and peddle your soul for a mess of dollars. But I know something that will tear you people apart, and I think you should pay me, I think you WILL pay me, to keep it all in the family.”

But the next day, the Lemur is found dead, shot through the eye with a Beretta. What is the secret he knew? And has he told anyone else? And why are the police suddenly asking Glass a lot of questions?

The Lemur might be a relatively simply tale — there’s nary a red herring to be seen and the narrative is far too short to twist and turn in the way of a conventional thriller — but it definitely holds the attention, probably because the author makes every scene, no matter how small, feel edgy and combative: you’re never quite sure which character in a given situation is going to come off the worse for wear.

As one would expect from a Booker prize-winning author, the prose is rich and alive but Banville reigns things in beautifully: there are no literary flourishes, just good writing with a distinct filmic quality to it.

Likewise, the characters are exemplarily drawn — the bullish but aloof father-in-law; the impeccably dressed and successful wife; the intriguing and artistic mistress; the arrogant “young pretender” step son; the once-famed journalist wrestling with his conscience and afraid to lose all — while the razor-sharp dialogue moves things along at a clipping pace.

The ending, while plucked from the usual “family secret” book of cliches, is satisfying in its own little way. But this is not the kind of book you read for the denouement; it’s the pleasurable journey you experience along the way that makes The Lemur such a beguiling read.

2 thoughts on “‘The Lemur’ by Benjamin Black”