‘The Book of Unknown Americans’ by Cristina Henriquez

I read Cristina Henríquez’s The Book of Unknown Americans for my book group, but it also fitted in quite nicely with #DiverseDecember. It’s a timely story about immigration — to the USA from Latin America — and the challenges those immigrants face on a daily basis.

Written in a light, almost “frothy” style, the novel follows the fortunes of a wide cast of characters in two families. Each character takes it in turn to tell their version of events, but there are also several chapters written as stand-alone “testimonials” by others that have also immigrated to the US. This structure serves to create a clamour of voices that show the ups and downs of moving to a new country and trying to fit in.

The blurb on the back of my edition claims it’s a love story between two teenagers — the brain-damaged Maribel Rivera, who has immigrated with her family to seek specialist education and treatment for her condition, and her neighbour Mayor Toro — and that’s partly true, but the book is more about showcasing life as an immigrant in the US, where the road isn’t always paved with gold and where racism and victimisation is always on the doorstep.

Unfortunately, I wasn’t particularly enamoured of this novel. I didn’t like the structure and thought the themes were overly simplified. But don’t take my word for it — many in my book group really liked it and it’s been a commercial and critical success in the US, where it was named a New York Times and Washington Post Notable Book, an NPR Great Read, and named one of the best books of the year by Oprah.com, School Library Journal, and BookPage.

For those of you who follow me on social media — and Instagram in particular — you will know I spent Christmas in Venice. It was my fourth visit to the watery city, and this time it was very much about the food and the drink, rather than the architecture and the walking (although there was plenty of that too). I packed Joseph Kanon’s Alibi in my suitcase, because I always love to read books set in the places I’m visiting, and this one certainly didn’t disappoint.

It’s largely billed as a murder mystery, but it feels more like literary fiction than anything else. It’s certainly intelligent, and the crime at its heart is almost too complex to follow, but it’s the scene setting — Venice in 1946, when everyone’s trying to deal with the outfall of the war —  which makes it such a great read. The characterisation is spot on too, especially the leads: Adam Miller, a traumatised war crimes investigator who has left the US Army and is now visiting his widowed mother in Venice,  and Claudia, an Italian Jew, who survived the death camps, with whom he falls in love.

The story, which is fast-paced and compelling (I read it in the space of two days, because I just had to know what happens next), is very much about love, forgiveness, war and moral culpability (one of my favourite themes in fiction and non-fiction). It brought to mind Robert Wilson’s A Small Death in Lisbon, which I read — and loved — years ago. This was my first Joseph Kanon; it won’t be my last.

‘Lies of Silence’ by Brian Moore 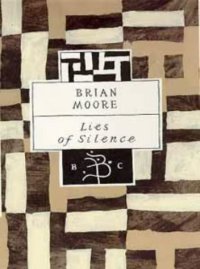 First published in 1990, Lies of Silence is one of those novels I’ve been meaning to read for a long time. I’ve had this little Bloomsbury Classic edition in my TBR pile for years, so when I was casting about for something quick and compelling to read it seemed like a good fit: I wasn’t wrong. From the first word, this is the kind of gripping read that makes your pulse race…

Set during the height of The Troubles in Northern Ireland, it thrusts one man into a moral quandary: on the day he plans to tell his wife he’s leaving her for another, much younger, woman, the IRA orders him to park a car in the car park of the Belfast hotel he manages. Without knowing the specifics, he believes the vehicle contains a bomb. But if he refuses to carry out the task, his wife, who has been taken captive, will be murdered; if he does what he’s told hundreds of hotels guests will be killed by the ensuing explosion. Whichever course of action he takes, there will be far-reaching and deadly repercussions…

In this intelligent, well paced novel, we see the themes of sacrifice, love, religion and war play out on a relatively small canvas. It is not your average psychological thriller. Yes, it’s a real page turner, but the prose style, almost old fashioned with an undercurrent of menace to it, lends it a literary feel. I loved it.

‘Venice is a Fish’ by Tiziano Scarpa

This is another book that I read while I was in Venice. Written by a native Venetian, it has real Italian flair: the writing is fresh and original, and much of the anecdotes contained within are humorous and (sometimes) surreal. It is strangely bewitching and, hands down, the most innovative book about Venice I’ve ever read.

Scarpa’s main thesis is that Venice is so beautiful — her paintings, her architecture, her canals — that the visitor can be inflicted with a disease known as “aesthetic radioactivity”, an idea that is pushed so much it soon becomes wearing. However, the book is filled with some good factual information of the historical variety — this isn’t a guide book telling you which hotel to stay in or what restaurant to eat at.

It’s divided into short chapters which are themed around the ways in which the visitor experiences the city. For instance, the first chapter entitled “feet” is about experiencing Venice on foot, “ears” explores the city’s noises and “nose” is about smell, and so on. My favourite, and the one that came in most handy for my trip, was “mouth”, which gave me the courage to order authentic Venetian food (rather than typical pasta and pizza) when out dining. Indeed, it’s thanks to Venice is a Fish that I soon developed an addiction to sarde in saór: fried sardines marinated in a sautéed mixture of onions, wine, vinegar, pine nuts and raisins. I’m getting hungry just thinking about it…

(Note, the book could benefit from a Table of Contents and an index, and the last 40 pages fail to be clearly labelled as appendices.)

Territorial Rights is one of Muriel Spark‘s lesser-known novels — and, as I soon found out, there might be a reason for that. I read it on the basis it was set in Venice, so would be perfect holiday fare. To some extent that’s true: this was a very easy read, one that felt frothy and light and gave me several good belly laughs. But the storyline is absolutely bonkers.

I know that Spark’s plots are always a bit crazy and that her characters are often absurd and strange, but this one was filled with so many oddballs and misfits, all carrying on in weird and often abysmal ways, that I couldn’t keep track of who was doing what and why. And the ending, after all that hilarity, was also a bit of a let down.

That’s not to say it’s a bad book — it’s just that there are better Spark novels to spend your time with. But if you like farces, washed down with a good dose of eccentricity, you’d be hard pressed to find anything as perfect as this.