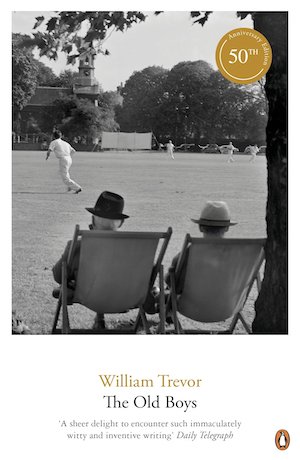 The Old Boys was William Trevor’s first novel. It was published in 1964. Having read several of his later novels, such as Death in Summer (1999) and Love and Summer (2009), I can safely say it wasn’t quite what I expected.

For a start, it’s set in suburban London (Trevor is an Irish writer) and is more of a black comedy than a poignant tale of thwarted love (with which I have come to associate him).

It tells the tale of four septuagenarians who all went to boarding school together more than 50 years earlier and behave very much as you would expect a group of immature school boys to behave — badly! They connive, cheat and backstab each other, all in an outlandish bid to establish who is “top dog”.

While the novella is told in the third person, it centres largely on Jaraby, a self-centred old coot, who believes he is going to be elected as president of the Old Boys Association, to which they all belong. But his former school boy associates have other ideas and, whether by accident or design, act to thwart Jaraby’s narcissistic intentions.

The plot moves forward mainly through a series of set pieces, some funnier — and more bizarre — than others, most of which feature quick-witted, snappy dialogue. Many of the conversations that ensue between characters are at cross-purposes and it is this confusion and ambiguity that leads to misunderstandings that are all blackly comic.

Comic tale about marriage and parenthood

As well as being a humorous look at male rivalry and revenge, it’s also a laugh-out-loud look at a marriage between the thoroughly dastardly Jaraby and his long-suffering wife, who he believes is mentally deranged. He goes to extraordinary lengths to have her medically diagnosed as such and yet she appears to be one step ahead of him all the way. (What she does to Jaraby’s pet cat, which she hates, is one of the most memorable — and wicked — elements of the story.)

Their estranged adult son, Basil, who moves back home with a menagerie of budgerigars, adds another dimension to their complicated relationship.

All the characters are well drawn, if somewhat over the top, but this gives Trevor the chance to mine a rich seam of human flaws and foibles. And while The Old Boys is full of amusing moments, the narrative is underpinned by a darker, albeit understated, undertone that demonstrate humanity’s most base tendencies. It’s a book full of laughs, but it is not a happy tale…

This is my 6th book for #TBR40. I bought it second-hand several years ago (as part of a trilogy of his early novels). You can read all my other reviews of his work on my William Trevor page.

8 thoughts on “‘The Old Boys’ by William Trevor”