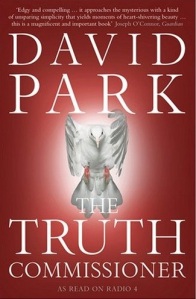 All good things come to those that wait, which is a fairly apt description for how I felt as I read David Park’s The Truth Commissioner. I considered abandoning the book several times, before everything began to kick into gear somewhere around page 242. That’s a lot of pages to wade through, and a lot of information to hold in your head, before things begin to make sense. It’s worth the effort though.

The story revolves around a Truth and Reconciliation Commission designed to heal the scars of Northern Ireland’s past by finding out what happened to citizens who disappeared during the Troubles. It hones in on one particular case in which a 14-year-old boy, Connor Walshe, disappeared, believed killed by the IRA on the basis that he was a “tout”.

The Commission is headed up by Harry Stanfield, a human rights lawyer, especially appointed by the British Prime Minister as the Truth Commissioner because “he has no personal or political baggage to be packed on either side”. But Stanfield, who spent the first 12 years of his life in Belfast, feels no affinity for the place and thinks the process of the Commission is a bit like “an old manged, flea-infested dog returning to inspect its own sick”.

Later we are introduced to three other characters: Francis Gilroy, a former political prisoner who is the newly appointed Minister with responsibility for Children and Culture; James Fenton, a retired RUC detective who now spends his time climbing mountains and helping a Romanian orphanage; and Danny, a young man living in Florida who’s looking forward to the birth of his first child with his Latino girlfriend, Ramona.

The current lives of these four men are explored in rather sizable “pen portraits”, which read almost as if they are standalone stories. This is an interesting approach to take, because it gives the reader a real sense of these people as human beings, rather than as the stereotypical characters one might expect from a book that is about the Troubles (for instance, the Brit, the cop, the IRA leader and the young terrorist). But it also makes for a slightly frustrating read, because you have no knowledge of how these characters are connected, nor how they fit into the nugget of the story, until some 150 pages from the end.

The novel doesn’t hit its stride until the four divergent storylines merge into one. But once the pace picks up it becomes almost thriller-like as you wait for the “truth” to come out: what did happen to Connor and who is to blame?

This is not a book for impatient readers, but it is a rewarding one. Given it’s set in Belfast and explores the notion of relatives reclaiming their dead in a war that raged for 30 years, I had expected the book to focus on politics and religion. But these are mentioned in mere passing, and often with the sense that it was all rather pointless, as these observations by Stanfield attest:

He looks at the faces of those standing outside the drawing office. The wind has whipped their cheeks so that they look as if they bear thin tribal incisions cut in their flesh. And after all, what was it really, except some rather pathetic and primitive tribal war where only the replacement of traditional weapons by Semtex and the rest succeeded in bringing it to temporary attention on a bigger stage?

The Truth Commissioner is essentially a book about people, with foibles and troubled histories, who are trying to find their way in unfamiliar, peaceful terrain. You get the sense that none of the four main characters are bad people, but that they got caught up in events that were “normal” at the time but now, through the lense of peace, look barbaric and wrong. Each of them, grappling with secrets of their own — whether it be Stanfield’s penchant for sleeping with prostitutes or Gilroy’s belief that he’s not cultured enough to be the minister for culture — are plagued by guilt, fear of retribution and denial. Each of them wants a way out. The “truth” isn’t always the answer…

7 thoughts on “‘The Truth Commissioner’ by David Park”