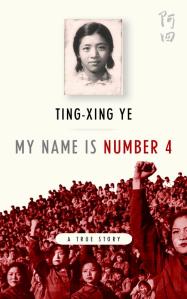 Ting-Xing Ye is a Chinese-Canadian author, who grew up in China during the Cultural Revolution. My Name is Number 4, first published in 1997, is her heart-rending account of what it was like living in that country during that time.

In China, number 4 is regarded as an unlucky number (similar to the way we in the West regard 13), and for Ting-Xing Ye it could not be more true. Born in Shanghai in 1952, she was the fourth child (out of 5) and by the time she was in her early teens both her parents had died. She and her siblings — two elder brothers, and an older and younger sister — were then raised by her Great Aunt.

Unfortunately, because her father was a factory owner, all the children were branded as “capitalists” when the Red Guards took over. This meant much humiliation at school, where she was subject to verbal and physical abuse.

But what terrified me most was a new government policy, supposedly designed to relieve the pressure of overpopulation in the cities. One child from each family must move to the countryside and remain there for the rest of his or her life.

Ting-Xing does the honourable thing and volunteers to move to the country, even though her elder sister was technically the sibling who should have gone. Ting-Xing was given two choices: a rubber plantation on Hainan Island in the South China Sea, or to a prison farm, far north of Shanghai in Jiangsu Province. After her brother did some investigating and discovered that the rubber plantation was plagued by a “devastating outbreak of hepatitis”, she chose the prison farm.

For the next six years, Ting-Xing lived and worked on the farm, which “had been set up in the early 1950s to put away political prisoners” but now housed other criminals, all male, whom had been charged with living “dissolute lifestyles”. This presented Ting-Xing and her female companions with another threat — sexual predation — while trying to cope with a new life of hard work, humiliation and separation from friends and family.

Ting-Xing’s account never wallows in self-pity, but she makes it clear that her deprivations were harsh and that she was, at times, subject to what we today know better as “sleep-deprivation torture used by many countries in espionage and war”.

She makes few friends and spends what little free time she has teaching herself English, which pays off in the end, when, aged 22, she passed the entrance exam to Beijing University.

Sadly, the Kindle edition of this book seems to be missing the section I was most interested in: Xing-Ting’s life post-prison. I wanted to learn of her life as a translator, her feudal-style marriage and later of her defection to Canada, where she married a Canadian and lives to this day. It was only upon reading the fine print, on the second-to-last page, that I realised this is an abridged edition designed for young adult readers — which may partly explain the over-emphasis on menstruation throughout the book (teenage girls love that sort of thing) and the patronising glossary at the back explaining about the PLA, Chairman Mao and the Gang of Four.

Despite this, My Name is Number 4 is a good read in the sense that you really get a feel for what it must have been like to live a life of fear, deprivation and exile all in the name of Mao’s Cultural Revolution. Xing-Ting Ye has an important story to tell, and she tells it well. It’s just a pity that this edition wasn’t the one I expected, but that’s more the fault of the marketing than the author. I reckon teenage girls would love it.