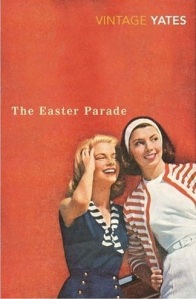 If ever a first line was to set the tone for the rest of the book, it is this one: “Neither of the Grimes sisters would have a happy life, and looking back it always seemed that the trouble began with their parents’ divorce.”

The sisters are Sarah and Emily, separated by four years — and a whole host of differing personality traits. Sarah, the eldest, is confident and pretty; Emily is intellectual. Both choose to lead very different lives — Sarah marries young and starts a family, Emily pursues a career — but neither of them find happiness.

There’s not much more to the story than that, but in Richard Yates’ carefully understated writing style there is a real emotional depth that resonates long after you’ve reached the final page. The more distance I put between the book and writing this review, the more I’ve come to appreciate the tragic beauty of these sisters’ wasted lives.

First published in 1976, The Easter Parade was Richard Yates’ fifth novel. It is set in New York and covers a 40-year period from the 1930s to the 1970s. It provides a fascinating glimpse of two opposing views of womanhood — that of wife and mother, and that of single women who pursue fulfillment through work — ideas that seem unusual for a male author to write about with such aplomb and insight. Indeed, male characters are few and far between in this novel, and when they do appear they are relatively weak and spineless.

For instance, the girls’ father, a newspaper man who writes headlines in the New York Sun, a job of which his daughters are incredibly proud, seems to fall apart after the divorce, turning to drink and telling his daughters he is “only a copy desk man” and not especially talented. Sarah’s husband, Tony, initially handsome and charming, turns out to be uncouth and abusive. And pretty much every man that Emily ends up with — and there are a lot of them — lacks any kind of self-esteem. But neither sister ever comes to the realisation that they deserve better.

That lack of self-awareness may be due to the girls’ mother, the slightly eccentric and over-the-top Pookie, who seems to emasculate anyone, male or female, who comes within 15 feet of her orbit. In fact, Emily finds her so demanding that entire years go by in which Emily avoids her mother completely. Even when Pookie is in an old folks home, Emily feels no guilt in not making the effort to visit her.

The Easter Parade is a sad tale, but it’s incredibly easy to read, and the pace is ferocious because Yates doesn’t bother with unnecessary detail — he’ll often miss out entire years by using phrases such as “two years later” or “for a few years” — but it doesn’t come at the expense of characterisation or plot. I found this book the perfect antidote to “reader’s block” and ate it up in a weekend.

My only quibble, and it’s a very small one, is that The Easter Parade is largely told through the eyes of Emily, so you never really get to understand Sarah’s motivations and why she makes the choices she makes. The best you can do is to simply guess.

Finally, many thanks to regular reader Jeniwren, from Oz, who sent me this book a couple of years ago; it only made its way to the top of my TBR a couple of weeks ago! I’ve now gone out and bought some of his other novels. I expect a Richard Yates’ binge coming on very soon.

21 thoughts on “‘The Easter Parade’ by Richard Yates”