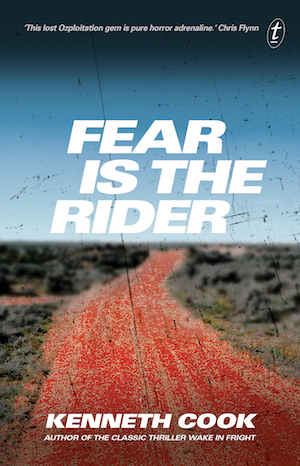 Oh. My. Goodness. *Wipes brow, extracts heart from mouth, picks up a snifter of whisky to steady the nerves* This is possibly the scariest, most spine-chilling and nerve-wracking book I’ve read. Ever.

It was written by the late Australian journalist and writer Kenneth Cook (1929-1987), who is best known for his classic novel Wake in Fright, which was published in 1961 and was later turned into a film. This new one, Fear is the Rider, published posthumously, was written in the 1980s and recently discovered in the author’s papers.

I’m so glad I didn’t read it before I went to the Australian outback last October or I might never have been brave enough to take to those long, isolated roads. It’s the kind of story that nightmares are made of even though you know that, realistically, it could never possibly be true.

On the run from a madman

The story goes something like this. A Sydney man, with some time to fill in before taking up a new job in Adelaide, goes on a detour to the desert. Advised by police not to go further down a certain road by more than 50km and to never leave his car if it beaks down — “the sun’ll kill you in two hours” — his plans fly completely out the window when a young woman, distressed and screaming, flags him down and gets in his vehicle:

“Drive, drive away quickly!’ she was almost shrieking.
“What?”
“Drive. Drive on. Drive!”
Her terror was compelling. He slammed the car into gear and drove fast along the bumpy, stony track.
“What…?” he began again.
“I’ll tell you, but get us out of here, for God’s sake get us out of here quick!”
She was still staring wildly into the scrub. Her fear seeped into his spine. There was something there, in the low trees, something terrible.

That something turns out to be a mysterious man with murder on his mind. And what ensues for the next 200 pages is an exhausting, adrenalin-fuelled car chase across some of the wildest, most dangerous terrain on the planet. No matter what the pair do, the man in the Land Cruiser is not far behind and even when they eventually abandon their vehicle and take to the gibber plains on foot, he follows them on foot too.

It’s incredibly filmic — think Wolf Creek meets Mad Max — and so visceral I could feel my heart rising up in my throat as I turned the pages. It’s not exactly high-brow entertainment and it’s occasionally sexist (a product of its time, I guess), but my goodness it’s a nail-biting ride — and I loved every minute of it.

The prose is occasionally clunky, but there are some wonderfully evocative descriptions of the outback, including the people and the little towns, and the way in which the empty nature of the desert can evoke fear:

The desert is many different worlds. There is stone. Then sand. Then rock. Then the strange lines of scrub where the ancient soaks run. The only constant is the immense isolation. The isolation and the eternal killing sun.

The ending is slightly preposterous, but on the whole this book works because it taps into our basic primal fears. Just don’t read it if you’re planning an outback adventure any time soon.

This is my third book for #ReadingAustralia2016.

Fear is the Rider will be published by Text Publishing in ebook format in the UK and the US, and paperback format in Australia, on 27 January. If you are a UK-based book blogger, you can request it on NetGalley — but be quick, it gets archived on the day of publication.

16 thoughts on “‘Fear is the Rider’ by Kenneth Cook”