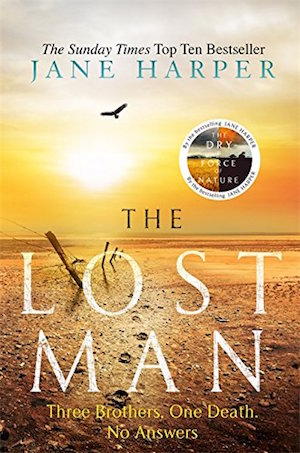 Having read Jane Harper’s previous two novels — The Dry and Force of Nature — both of which I loved, I was super excited to hear there was a third in the offing and managed to secure myself a review copy via NetGalley.

The Lost Man is not part of the Aaron Falk police series so it can be read as a standalone (though, to be fair, they can all be read as standalones, but I would always recommend starting with The Dry first).

It’s set in the Far North Queensland outback and revolves around a trio of brothers, one of whom dies in mysterious circumstances. Essentially it’s a murder mystery, but it’s not a police procedural. Instead, the main “sleuth” — for want of a better word — is Nathan, the older brother, who tries to piece together how his younger brother, Cameron, came to be found on top of the Stockman’s Grave on the border of both their vast cattle properties. Cameron had died from dehydration, but why had he abandoned his vehicle in the heat of the day and why had he visited the grave?

This sounds like an intriguing puzzle to solve, right? I thought it was to begin with, but there’s something about this book that just didn’t work for me. It’s not the mystery, nor the plotting, which is very good and moves along at a reasonable clip. It’s clear the family — three generations all living under the one roof — has a lot of closely kept secrets ready to be exposed and this gives the novel a readerly hook. It’s the flat, clichéd writing — all tell and no show — that ruined it for me.

The back stories of the two older brothers are nicely fleshed out, but as characters they are two-dimensional. Subsidiary characters, such as Liz, the widowed matriarch of the family, and Xander, Nathan’s teenage son, are even more thinly drawn.

It doesn’t help that the setting and the livelihoods being described here don’t feel authentic (it’s all so painfully white and there’s not a single mention of indigenous culture or people). And there’s far too much over reliance on worn out tropes — of men not talking about their feelings, of the outback being hot and inhospitable, of women being trapped in abusive domestic situations.

There’s also a tedious romantic theme running throughout — of the exotic European woman who marries the wrong Australian brother — that also lends the story a Mills and Boon flavour.

I know this probably sounds harsh, but I was almost ready to abandon the book about a third of the way in, but kept reading in the hope it might get better. It does pick up slightly towards the end when the pieces of the mystery — all of which I guessed pretty early on — began to fall into place.

Going by other reviews I’ve seen, I’m seriously out of step with common opinion, making me wonder if I even read the same novel.

If you’re looking for a brilliant evocation of outback life, of what it’s like to work in a remote location, struggling with drought and threats of repossession, hunt out Stephen Orr’s brilliant and much overlooked The Hands instead. If you just want an intriguing mystery set in a kind of half-imagined outback, then read this one.

The Lost Man was published in Australia in late October, but won’t be available in the UK until next February 2019 (although you can purchase the Kindle edition if you are that way inclined).