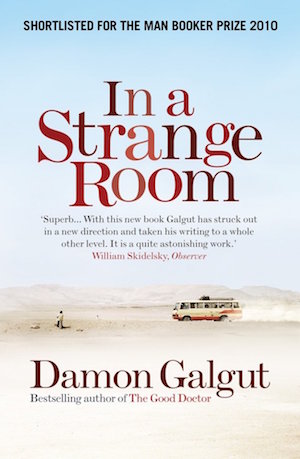 Damon Galgut’s In a Strange Room is a lush, hypnotic novel that explores longing and desire through the prism of travel.

Divided into three seemingly unrelated parts — The Follower, The Lover and The Guardian —  it merges in the reader’s mind to form a seamless whole.

If you’ve ever gone travelling/backpacking, felt alienated or not known what you want from life, it will resonate.

Written in straightforward prose, but with a haunting lilt to it, Galgut takes the reader on a journey that feels like a blend of autobiography (in some sections the narrative switches between first person and third person, with a meta-fictional “Damon” as the focus), reportage and literary fiction.

He beautifully captures the sense of dislocation one can experience when passing through places so that nothing feels quite real and yet everything appears strange, almost threatening, especially if you are not “a traveller by nature” and are riddled with anxiety. Yet this heightened vulnerability also gives the world “a power it doesn’t have in ordinary life”.

He’s wonderful at exposing the myth that travel is always glamorous or exciting: sometimes it’s nothing more than waiting around.

A large part of travelling consists purely in waiting, with all the attendant ennui and depression. Memories come back of other places he has waited in, departure halls of airports, bus-stations, lonely kerbsides in the heat, and in all of them there is an identical strain of melancholy summed up in a few transitory details. A paper bag blowing in the wind. The mark of a dirty shoe on a tile. The irregular sputter of a fluorescent bulb. From this particular place he will retain the vision of a cracked brick wall growing hotter and hotter in the sun.

Petty squabbles on the road

And he’s very good at examining the relationships between people on the road, whether the tensions between travelling companions or friendships forged with people you meet along the way. This element is particularly well examined in the second part of the book, when the narrator goes on an extended walking holiday with Reiner, a German he meets in section one.

There is an unspoken sexual tension between the two, but neither of them acts on it and this spills over into bickering and conflicts over simple things such as where to set up their tents and what to eat. And behind all this is a further point of strain: Reiner is financing the trip for both of them and in holding the money he also wields power over his companion:

But whenever they stop to buy something there is a silent battle about what they will choose and who will be allowed to have it. Reiner continues to buy his chocolates, for example, but if I want something there is often a dispute, hmm I don’t know about that what do we need that for. And sometimes Reiner will buy something for himself, a box of sweets or a bottle of water, and wait for his companion to ask. The asking is humiliating, which Reiner knows. Money is never just money alone, it is a symbol for other deeper things, on this trip how much you have is a sign of how loved you are, Reiner hoards the love, he dispenses it as a favour, I am endlessly gnawed by the absence of love, to be loveless is to be without power.

(Notice the switching between “he” and “I” in the paragraph above.)

A realistic portrait of travel

The book also looks at the more pragmatic problems of travel, such as border crossings, finding safe accommodation in hostile territory and what happens when you or your companion falls ill on the road. There’s also the age-old problem of whether you should bother to keep in touch with people once you part ways.

And my favourite dilemma: what to do when the travel stops? Do you put down roots, or keep hitting the road? Do you sacrifice the security of a conventional life, or take a risk and lead your life in a more adventurous way?

He goes to London, but the same restlessness comes over him there, and he goes on somewhere else. And somewhere else again. Five months later he finds himself in a strange country, at the edge of a strange town, with dusk coming down. He is watching people drifting into a funfair on the other side of an overgrown expanse of ground.

If you haven’t already guessed, I really loved this book, so much so I ordered Galgut’s entire back catalogue in the wake of it (apart from The Good Doctor, which I read a couple of years ago). But to write about it here seems almost impossible. This isn’t a book heavy on plot or even character; it’s about feelings, moods, movements and journeys. But it’s so evocative, so fleeting and ephemeral, that it’s like trying to pin clouds to paper.

In fact, Galgut describes a journey as “a gesture inscribed in space, it vanishes even as it’s made” — but he could have well been explaining what it is like to read this book.

You go from one place to another place, and on to somewhere else again, and already behind you there is no trace that you were ever there. The roads you went down yesterday are full of different people now, none of them knows who you are. In the room you slept in last night a stranger lies in the bed. Dust covers over your footprints, the marks of your fingers are wiped off the door, from the floor and table the bits and pieces of evidence that you might have dropped are swept up and thrown away and they never come back again.

In a Strange Room was shortlisted for the 2010 Man Booker Prize. Pieces of it originally appeared in the Paris Review.

This is my 13th book for #20booksofsummer. This is yet another Kindle special (99p) that has been lurking on my device for several years. I bought it in December 2011, but have no memory as to what prompted me to make the purchase.

19 thoughts on “‘In a Strange Room’ by Damon Galgut”