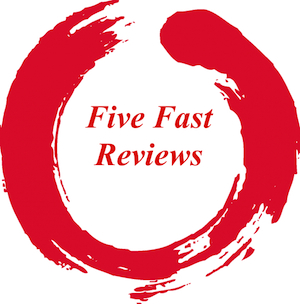 It’s been a crazy few weeks around here… and this blog has been much neglected (my last review was posted some three weeks ago). So, in a bid to get up to speed before December comes to an end, here’s five books, arranged in alphabetical order according to the author’s surname, that I read during the year that I never quite got around to reviewing.

‘Songs for the Cold of Heart’ by Eric Dupont

Songs for the Cold of Heart was shortlisted for this year’s Giller Prize, but it lost out to Esi Edugyan’s Washington Black. We chose it as our Shadow Giller winner — a totally unanimous decision.

Quite unlike anything I’ve ever read before, this doorstop of a novel is epic in scope and unrivalled in ambition, one that makes for a truly immersive reading experience.

Full of vivid, well-drawn characters and wonderfully evoked settings, it’s a tale that spans several generations of the one Quebec-French family, with each new chapter able to stand alone as a short story. But the force of all those chapters working together creates a richly layered narrative in which motifs —  and even jokes — keep repeating themselves from one generation to the next, revealing unexpected connections and insights into a family whose reputation has been built on a combination of legend, invention and self-mythologising.  It brims with sex and humour, love and tragedy, empathy and arrogance, and is littered with tall tales, a smidgen of magic realism and much innuendo.

Expertly translated by Peter McCambridge (it must have taken an age to work on), this is a proper literary tour de force. Sadly, it is priced at an eye-watering £29 here in the UK, which is a shame, because it truly deserves a much wider English language audience.

‘An Ocean of Minutes’ by Thea Lim

Yet another title that was shortlisted for the 2018 Giller Prize, Thea Lim’s An Ocean of Minutes proved to be a great surprise. I was dreading this slice of dystopian fiction in which a 20-something woman time travels from 1981 to 1998 to escape a pandemic and be reunited with her one true love, but it’s hugely atmospheric and has a strangely haunting, elegiac tone. It totally swept me away, taking me through all the emotions from anger to heartbreak — and back again.

Reading between the lines, there are hints of social commentary — about modern slavery, the class system and immigration — and the ways in which we can become trapped by circumstances beyond our control, with no way to better ourselves or escape economic insecurity because of the systems that conspire against us. But this is also a story about courage, faith, taking risks and believing in the power of love and family.

‘The Passage of Love’ by Alex Miller

It’s no secret that Alex Miller is one of my favourite authors, and this novel, which is the thinly veiled story of his own life, is probably my favourite book of the year. Another truly immersive read, I devoured almost all 550-plus pages in the space of a weekend, but then eked it out for another fortnight because I simply did not want the tale to end.

It’s filled with angst, love and cruelty, as well as the struggle to be true to oneself, to find your place in the world and to find the courage to lead a creative life rather than a safe one. It’s a fascinating portrait of a complicated marriage, too, showing how we can never truly know the person with whom we are most intimate. And it’s a quintessentially Australian tale, not only in its achingly beautiful descriptions of landscapes and country towns, but of the gross injustices carried out against the First Peoples, whom Miller himself has lived and worked with and written about in previous novels.

Reading this book also helped me to appreciate the common themes in Miller’s extraordinary backlist; the pennies began to drop about his obsession with Germany and Holocaust survivors, the London Blitz, Aboriginal genocide, the writer’s life and his amazing psychological insights into love and intimacy.

‘Joyride to Jupiter’ by Nuala O’Connor

I read Joyride to Jupiter as part of the #20booksofsummer challenge, but never got around to writing about it on this blog. I have previously read O’Connor’s novels, published under the name Nuala Ní Chonchúir, and found them both deeply moving and evocative.

This collection of short stories is more of the same, all written in eloquent, pared-back language and filled with well drawn, often troubled and flawed, characters struggling to make sense of the world. Some stories are only a few pages long, but even so, the reader is immediately immersed into the lives (and loves) of intriguing people, whether that be a young girl witnessing her father’s infidelity or a devoted husband dealing with his wife’s dementia. There are recurring themes — mainly sexual, it has to be said — but all the stories, which are set in various places around the world, are universal. It’s a quick read, but I can’t say it’s a particularly memorable one.

‘Death in Spring’ by Mercè Rodoreda

Part of Penguin’s  European Writers series, this novella packs a real punch despite the fact it has no real plot. Set in a remote village in Catalan where the citizens are sticklers for following tradition, it tells the story of a young boy’s coming of age and how he must forge his own path in a society that is both oppressive and cruel.

Said to be an allegory of life under Franco’s dictatorship, it’s a deeply disturbing read full of nightmarish scenes and vivid, no-holds-barred language. But it’s also very beautiful, with lush, lyrical descriptions of nature and the ever-changing seasons (indicating that life goes on regardless of whatever cruel acts humans do to each other). But, even so, Death in Spring leaves the reader unsettled, perhaps because it’s such a visceral, often challenging, experience.