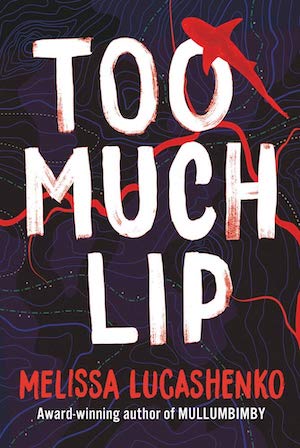 Melissa Lucashenko’s Too Much Lip is a brash, gritty and hard-hitting novel about an indigenous (“blackfella”) family, deeply traumatised by past events, which is now grappling with a new challenge: saving their beloved river and Ava’s island from the local mayor’s plans to build a new prison on it.

The story is largely told through the eyes of 30-something Kerry Salter, who arrives back home — the fictional NSW town of Durrongo  — on the back of a stolen Harley Davison motorbike carrying a backpack stuffed with $30,000 cash, the proceeds of a botched armed robbery, which resulted in the imprisonment of her lesbian lover, Allie, who has now broken off their relationship.

Kerry thinks her visit to see her dying grandfather is going to be a fleeting one. She’ll pay her respects, tolerate her mother’s jibes and then return to the city, where she can nurse her broken heart and keep a low profile. But things don’t quite work out that way.

Before she can escape, her grandfather dies, so she stays for the funeral and later, when her family discovers that a place of great importance to them — Granny Ava’s island — has been proposed as the site of a new jail, she decides to stay and help them fight the development. The lure of a potential romance with a white man with whom she went to school acts as a sweetener.

On the surface, this novel could be seen as fairly fickle fair, a kind of grungy chick-lit novel, where the protagonist is seemingly sex obsessed and doesn’t mind speaking her mind, even if it gets her into trouble.

Too much lip, her old problem from way back. And the older she got, the harder it seemed to get to swallow her opinions. The avalanche of bullshit in the world would drown her if she let it; the least she could do was raise her voice in anger. Give the arseholes a blast, then stand and defend, or else run like hell.

But Too Much Lip is strangely subversive, for Kerry is on the wrong side of the law — in fact, she’s running from it.

But it’s also a deeply confronting read for those readers who are not indigenous. In its portrayal of an aboriginal family struggling to keep it together, Lucashenko shows how generations of trauma, from dispossession to massacres, aboriginal missions to the forced removal of children, have played out in all kinds of negative ways, including alcoholism, violence, poverty and social injustice.

Dugais [white people] had no idea. No fucken clue what was at stake when you walked out into the world wrapped in dark skin. And if you told them the truth it was always boo hoo, poor me.

This reality, of what it is to be indigenous living in a deeply prejudiced white society, is reflected throughout the text. I make no apologies for including a whole bunch of quotes to illustrate this point. There are references to poverty…

But the crew in Trinder mostly ate bread and chips when they ate at all. Meat was strictly for pay week, same as shop-bought grog and smokes were. Off-pay week was hungry week, sniffing around friends’ and rellos’ houses for someone who’d scored a food parcel, or a job, or had had a win at bingo. She looked down into her lap. It was a shamejob to go explaining how blackfellas lived. Even if dugais believed you, they were full of useless fucking genius suggestions on how to climb out of poverty. Like it was simple. Like it didn’t suit the powers that be to keep poor people scrabbling in the shit, keep their attention off the rich world’s sparkling goodies in case they got any bright ideas about grabbing some for themselves.

… and dealing with the government department responsible for social security…

‘Centrelink,’ she said sourly. ‘I don’t wanna go see them mob. Standover merchants! On the phone for nearly two blooming hours and then it cuts out! Now I got no pay ’n no credit! Person could starve to death for all they care!’

… and the institutionalised racism in the criminal justice system:

She had no idea how long they would need the QC. Every court case she’d ever seen was done and dusted in under half an hour.

There’s also an interesting twist, a reverse logic if you will, in which white people are seen as the thieves and the barbarians…

The dugai can flap their jangs as much as they like, Pretty Mary had reported him saying, but us mob got the law of the land and that’s that. We’s in everything: the jagun, the trees, the animals, the bulloon. It’s all us, and we’s it too. And don’t ever let the dugai tell ya different. They savages, remember.

I have to admit that I wasn’t too sure about this novel when I first began it (perhaps because it was so confronting and because I didn’t feel much empathy with Kerry), but the further I got into it the more I warmed to it. It’s a truly immersive read, taking you deep into the bosom of a complicated family peopled with highly opinionated, colourful characters, all flawed but oh-so human — and with wonderful names, such as Pretty Mary, Grandad Chinky Joe and Black Superman.

It’s very much a plot-driven story and Lucashenko does an exemplary job of bringing together Kerry’s storyline with a second narrative thread involving greedy developers, including a Sydney real estate agent.

And while the novel deals with big issues, there’s an undercurrent of snarky, but clever humour running throughout to lighten the load.

‘Everyone on the planet’s got a culture, Mum, even if it’s The Footy Show and Southern Cross tats – it’s still a culture. Just a shit one. And anyway, why do that mob any favours now?’

Too Much Lip is definitely the most thought-provoking book I’ve read so far this year presenting as it does a perspective rarely shown in contemporary fiction.

This novel has been shortlisted for this year’s Stella Prize and has been positively reviewed at ANZLitLovers and Whispering Gums.

This is my 5th book for #AWW2019 and my 4th for the 2019 Stella Prize shortlist. This one is available as an ebook in the UK, though expect to pay a hefty price for the paperback edition.

14 thoughts on “‘Too Much Lip’ by Melissa Lucashenko”