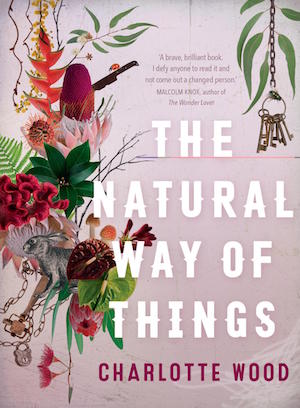 Like the beautiful image on the cover in which gorgeous flora and fauna hide the objects of captivity  — chains, locks, a knife and barbed wire — Charlotte Wood‘s The Natural Way of Things reveals the darker elements of society which are often obscured by our shallow obsessions with, for instance, sex, glamour and celebrity.

In a narrative that is both gripping and illuminating, Wood creates a dystopian world that doesn’t actually look much different to the current one. Here, women are punished for involvement in sexual “crimes” and misdemeanours in which they have been publicly shamed and their male perpetrators have got away scot-free.

When the story opens, we meet two women, Yolanda and Verla, who have awoken after a drugged sleep. They find themselves in an unfamiliar room and they are both wearing “stupid Amish clothes”. They are guarded by two men in boiler suits. Where are they? What have they done to be imprisoned in this manner? What can they do to escape?

What would people in their old lives be saying about the girls? Would they be called missing? Would some documentary program on the ABC that nobody watched, or one of those thin newspapers nobody read, somehow connect their cases, find the thread to make them a story? The Lost Girls, they would be called. Would it be said, they ‘disappeared’, ‘were lost’? Would it be said they were abandoned or taken, the way people said a girl was attacked, a woman was raped, this femaleness always at the centre, as if womanhood itself were the cause of these things? As if the girls somehow, through the natural way of things, did it to themselves. They lured abduction and abandonment to themselves, they marshalled themselves into this prison where they had made their beds, and now, once more, were lying in them.

The answers to those questions are revealed slowly as we follow Yolanda and Verla (and the other women held captive with them) over the course of a year. It’s a brutal, often harsh existence, but there are chinks of light as the women reconnect with nature (Wood writes eloquently of the quintessential Australian landscape and the wildlife, birds in particular) and learn to forget their external appearance and focus on their inner strength instead.

Their back stories are nicely fleshed out, showing how each character came to be in her current situation — and highlighting how varied their sex “crimes” had been. It’s a powerful, often terrifying, read, one that alters your perspective and leaves the reader changed in some indelible way.

A story of sexual shaming

The book is clearly an intelligent and highly original response to our modern, switched-on digital lives, where sexual shaming, particularly via social media, has become normalised. This is how one character puts it:

In the days to come she will learn what she is, what they all are. That they are the ministers-little-travel-tramp and that Skype-slut and the yuck-ugly-dog from the cruise ship; they are pig-on-a-spit and big-red-box, moll-number-twelve and bogan-gold-digger-gangbang-slut. They are what happens when you don’t keep your fucking fat slag’s mouth shut.

But for all its exposé of misogyny, where there’s one rule for men and one for women, The Natural Way of Things is not a feminist rant. Yes, it bubbles with a slow-burning anger and it highlights the duplicity and hypocrisy of our society and shows how victims are often blamed for the horrible things that happen to them, but Wood is careful not to tar all men with the same brush.

The women in this story don’t come off lightly either. Some alliances are formed, but generally they compete against one another, and there’s a memorable scene near the end in which they all go crazy for goody bags (“they cry out and unscrew bottles and squish creams into their hands and press sticky gloss to their flaking lips with their dirty fingers”) that reveals shallow obsessions — with appearance, with shopping, with material possessions.

But the story is just as much about power and survival than anything else, and it should appeal to both male and female readers.

The novel is very visual (it’s no surprise that the feature film rights have been acquired by independent producers Katia Nizic and Emma Dockery) and the language, sometimes searing and blasphemous, is always tightly controlled, eloquent and delicious to read. Indeed, Wood is one of my favourite authors — I’ve reviewed  The Submerged Cathedral (2004),  The Children (2008) and Animal People (2011) — but this new novel is a sharp and unexpected change in direction for her, and I’m hoping that its popularity and critical acclaim will bring her earlier work to a much wider audience. She deserves it.

It has been widely reviewed by Australian bloggers (see the Australian Women Writers Challenge website for links) as well as Simon Savidge here in the UK.

It will be published in the UK by Allen & Unwin on 2 June, and in Canada/USA by Europa on 28 June.

30 thoughts on “‘The Natural Way of Things’ by Charlotte Wood”